The funds traced to them, which are believed to have been looted, are to be frozen and repatriated to Nigeria.

All the 22 former political leaders and businessmen are being investigated by the Economic and Financial Crimes Commission (EFCC).

The ratification of the six agreements between the two countries delayed the seizure of the assets.

From the records at the Land Registry in the UAE, most of the properties have been traced for forfeiture with the UAE authorities.

Under investigation are seven former governors,  seven ex-ministers, four businessmen, a former  chieftain of the Peoples Democratic Party (PDP), a former Comptroller-General of the Nigerian Customs Service, a former presidential assistant indicted in the $2.1billion arms deals and  a former First Lady who  allegedly used fronts to acquire some choice properties.

Two of the assets have been traced to a former Minister of Petroleum Resources, Mrs. Diezani Alison-Madueke, who was implicated by the United States Department of Justice as a beneficiary of $1.5billion laundered cash.

Assets of some business associates of the ex-minister may also be attached, a source close to the investigation said.

Also under searchlight are about five luxury properties allegedly linked with a former official of the defunct Oceanic Bank.

Following a state visit to the UAE by President Muhammadu Buhari on January 19, 2016 , the Federal Government signed six agreements with the Emirates.

A source, who pleaded not to be named, said: “With the signing of the agreements, a major hurdle has been cleared and this will enable us to proceed with the application for the seizure of the assets of more than  22 highly-placed Nigerians who have been under probe for alleged money laundering.

“Before the pact, the UAE law mandates any foreign anti-graft agency to seek the consent of the owner of any property being verified before you can have access to same. But now, the anti-graft agencies in Nigeria  can send a list of suspected assets to the UAE authorities  through the Ministry of Justice and the Ministry of Foreign Affairs and the Mutual Legal Assistance will be invoked.

“Our task is made easier because the Land Registry System is digitalised  in a manner that it will not take five minutes to obtain information on anyone  suspected of money laundering.

“The onus is on us to present sufficient facts  on why some of these assets should be seized. We will show evidence of corrupt practices, the laundering of public funds and the purchase of the suspected assets with looted funds.”

Responding to a question, the source added: “The EFCC has secured Mareva Injunction to freeze some foreign accounts and seize some assets linked with some of these highly placed Nigerians in  some jurisdictions.”

according to the source, “with the indictment of a former Minister of Petroleum Resources, Mrs. Diezani Alison-Madueke, by the US Department of Justice and her two alleged business associates, seizing their assets will be easier”.

Besides, said the official, the conviction of a former  Oceanic Bank official by a court in Nigeria  was enough to seize any assets linked to her.

“We also have the case of a  former-governor  who failed in his bid to transfer about $517million loot to Dominican Republic from the UAE. We will want to seize the cash,” the official said.

Section 7 says: “The commission has power to (a) cause any investigations to be conducted as to whether any person, corporate body or organisation has committed any offence under this Act or other law relating to economic and financial crimes.

“(b) Cause investigations to be conducted into the properties of any person if it appears to the commission that the person’s lifestyle and extent of the properties are not justified by his source of income.”

Sections 28 and 34 of the EFCC (Establishment Act) 2004 and Section 13(1) of the Federal High Court Act, 2004 empower the anti-graft agency to invoke Interim Assets Forfeiture Clause.

“Section 28 of the EFCC Act reads: ‘Where a person is arrested for an offence under this Act, the Commission shall immediately trace and attach all the assets and properties of the person acquired as a result of such economic or financial crime and shall thereafter cause to be obtained an interim attachment order from the Court.’

Section 13 of the Federal High Court Act reads in part: “The Court may grant an injunction or appoint a receiver by an interlocutory order in all cases in which it appears to the Court to be just or convenient so to do.

(2)          Any such order may be made either unconditionally or on such terms and conditions as the Court thinks just.”

The Chairman of the Senate Committee on Foreign and Domestic Debts, Senator Shehu Sani said over $200 billion had been hidden in UAE.

He said: “Over $200 billion is stashed away from Nigeria to Dubai alone. This may be the monies stolen since in the past 20 years. I am not talking about estates and bonds and other securities bought with Nigeria stolen money.”

The anti-money laundering policy of UAE Central Bank reads: “Any person who commits, or attempts to commit, a Money Laundering offence shall be punished by imprisonment of up to 10 years and or a fine of between AED 100,000 and AED 500,000.

”In cases of multiple perpetrators, the Court subject to its discretion, may exempt a perpetrator from the imprisonment penalty if he takes the initiative and reports the crime to the competent authorities prior to the knowledge of such authorities and if his actions lead to the arrest of the other perpetrators or seizure of the laundered money.

”Any establishment that commits an offence of money laundering, financing of terrorism or financing of any unlawful organizations, shall be punished by a fine of AED 300,000 and AED 1,000,000.

”Failure to report a suspicious transaction shall be punishable by imprisonment and /or a fine of between AED 50,000 and AED 300,000.

”Tipping off a person being investigated regarding a suspicious transaction shall be punishable by imprisonment of up to one year and/ or a fine of between AED10,000 and AED 100,000.

”Violation of the requirements of Airport Declarations shall be punishable by imprisonment and or a fine.” 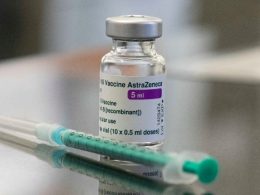 The Lagos State Government says it will resume the administration of the second dose of the AstraZeneca COVID-19 vaccine on Aug. 30.
byTayo Aderinola
No comments 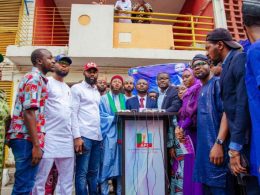 About 19 former youth leader aspirants who were zoned out of the contest for the National Working Committee (NWC) position of the All Progressives Congress (APC), have collapsed their structures and declared support for the emergence of Olusegun Dada as the next National Youth Leader of the ruling party at the forthcoming March 26 national convention.
byLateef Idris
No comments