Nigerian Government has approved N836million as augmentation for the establishment of oxygen production plants for COVID-19 pandemic intervention across the country.

Nigerian Government has approved N836million as augmentation for the establishment of oxygen production plants for COVID-19 pandemic intervention across the country.

The decision to approve the additional funding was arrived at after the weekly meeting of Nigeria’s cabinet, the Federal Executive Council on Wednesday.

The News Agency of Nigeria (NAN) reports that the council had in June approved N5.615 billion to four major contractors for the emergency supply, installation and maintenance of the 38 oxygen plants in various parts of the country.

The approval in June followed the Presidential Steering Committee’s (PSC) announcement to increase oxygen reserve capacity in the event of a third wave of the COVID-19 pandemic.

The Minister of Information and Culture, Alhaji Lai Mohammed, who briefed State House correspondents on the outcome of the council meeting, on behalf of the Minister of Health, said the approval of the upward review followed a memo presented by the minister of health to the council.

The meeting was presided over by Vice-President Yemi Osinbajo on Wednesday in Abuja.

The minister said: “The Minister of Health also presented a memo seeking for an upward review for the emergency supply, installation and maintenance of the 38 oxygen plants all over the country.

“You will remember in June, the Federal Executive Council, actually approved the sum of N5.615 billion to four major contractors for the emergency supply, installation and maintenance of 38 oxygen plants in various parts of the country.

“Regrettably, the four companies also came back recently with the same complaints ranging from fluctuation in the foreign exchange and the scarcity of the material all over the world as a result of COVID-19.

“So, he presented a memo for augmentation in the sum of N836 million and this was also approved today.

Mohammed disclosed that the council also approved a revised estimate costs and extension of the contract of the consultants supervising the Bagwai Water Dam Irrigation project from an initial sum of N98 million to N302.8million.

“And due to several logistics problems, the project is still on and just recently the FEC actually approved an augmentation of the entire contract and that means also that the mandate of the consultant supervising the construction would also have to be reviewed.

Senator Stella Oduah on Monday, staged a protest at the venue of the PDP primaries in Anambra…
byTayo Aderinola

After months of inactivity due to the coronavirus pandemic, football leagues in Nigeria have finally received the green…
byLateef Idris 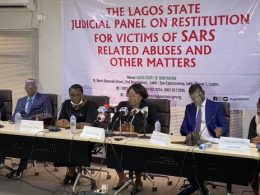 The Lagos State Judicial Panel on restitution for victims of SARS related abuses and other matters sitting in Lagos on Friday awarded a total sum of ₦19.2 million to six petitioners for the infringement on their fundamental right to life and human dignity by the Nigeria police force, just as it dismissed a petition for lacking merit.
byLateef Idris