It has been the yearly tradition of a succession of corps members posted to the town and President Buhari in a tweet said the visit forms one of the highlights of his Eid-el-Kabir celebrations in the ancient town.

Buhari said he is always pleased to see the National Youth Service Corps (NYSC) achieving the purpose of national unity that inspired its creation since 1973.

Speaking to newsmen at his country home after the Eid-el-Kabir prayers, President Buhari said the NYSC scheme had over the years continued to pursue the purpose of integrating the country, noting that the diversity of cultures remained Nigeria’s greatest strength.

“I am always pleased to see corps members in Daura and other parts of the country. From the postings, we get to learn more about other cultures,’’ he said.

The President said the large number of corps members in Daura, mostly from the Southern part of the country, was an indication that the dream of a unified Nigeria remained a reality.

President Buhari noted that graduates from the North, who served in the Southern states, also learnt a lot from the diversity that had made Nigeria a unique country.

President Buhari observed that serving, as an army officer, in some Southern parts of the country such as Lagos and Ibadan were very rich experiences.

The President was accompanied to the Eid-el-Kabir prayers by Presidential aides, members of his family, and neighbours.

The Academic Staff Union of Universities (ASUU) has given the Federal Government a fresh condition amid the ongoing strike.
byLateef Idris
No comments 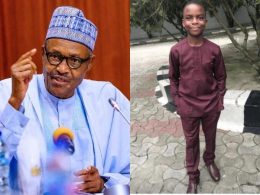 President Muhammadu Buhari has vowed to get justice for Sylvester Oromoni, the late 12-year-old student of Dowen College, Lekki.
byTayo Aderinola
No comments

My major source of income not acting – Omobutty

Nigerian actress Biodun Okeowo, popularly known as Omobutty, has revealed her major source of income which is far…
byTayo Aderinola
1 share
1
0
0
No comments