Chiponda disclosed this to the News Agency of Nigeria (NAN) on Monday in Sharm El-Sheikh at the sidelines of the 27th Conference of Parties to the UN Framework Convention on Climate Change (COP 27).

The climate activist said Africa should be focusing its expertise on building robust renewable energy infrastructure rather than expanding oil exploration.

“So we should be closing down fossil fuel pipelines rather than allow African people to continue to die because of climate disasters.

“Renewable energy is the way to go, it has become cheaper in terms of investment and it’s going to create more cleaner jobs,” Chiponda said.

She also stressed the need for the multinational oil companies (mainly from Europe, U.S) to be held accountable for the damage caused to the environment in Africa.

The activist maintained that these oil companies continue to exploit Africa for business profits while going green in their home countries.

” Oil companies need to transition themselves,. they need to be accountable for the climate impacts that they have caused.

NAN reports that world leaders and representatives from 198 countries and more than 30, 000 delegates are attending the COP27.

COP27 begins near the end of a year that has seen devastating floods and unprecedented heat waves, severe droughts and formidable storms, all unequivocal signs of the unfolding climate emergency.

At the same time, millions of people throughout the world are confronting the impacts of simultaneous crises in energy, food, water and cost of living, aggravated by severe geopolitical conflicts and tensions.

In this adverse context, some countries have begun to stall or reverse climate policies and doubled down on fossil fuel use.

COP27 is also taking place against the backdrop of inadequate ambition to curb greenhouse gas emissions.

According to the UN’s Intergovernmental Panel on Climate Change, CO2 emissions need to be cut 45 per cent by 2030, compared to 2010 levels to meet the central Paris Agreement goal of limiting temperature rise to 1.5 degrees Celsius by the end of this century.

This, the UN said, is crucial to avoid the worst impacts of climate change, including more frequent and severe droughts, heatwaves and rainfall.

A report published by UN Climate Change ahead of COP27 shows that whilst countries are bending the curve of global greenhouse gas emissions downward, efforts remain insufficient to limit global temperature rise to 1.5 degrees Celsius by the end of the century.

Since COP26 in Glasgow, only 29 out of 194 countries came forward with tightened national plans.

The summit which started on Sunday will end on Nov. 18. 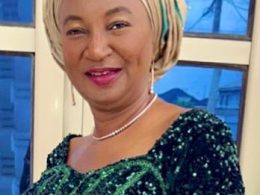 A Town Planner in the employ of the Lagos State Government, Tpl. Risikat Adebukola Bello, has emerged as the first Chairman of Women in Town Planning at the bi-annual meeting of the Association of Women Town Planners, held recently in Portharcourt, Rivers State.
byLateef Idris
No comments

Lagos Commissioner of Health, Prof Akin Abayomi, has announced the death of a COVID-19 patient in a private…
byTayo Aderinola
No comments