The drivers under the aegis of Joint Drivers’ Welfare Association of Nigeria (JDWAN) called the strike over what they termed excessive extortion by the management of Parks and Garages in the state.

Although the union gave notice of the planned strike, not many commuters knew about it until they found themselves stranded at bus stops.

The union noted in a press conference on October 28 that they were tired of the indiscriminate extortion and harassment by illegal tax collectors.

Commuters at Cele Bus Stop, Mile 12 and environs were seen trekking with no vehicles in sight.

It was gathered that the few vehicles that operated doubled their fares with passengers paying as much as N400 from Cele to Mile Two.

A tricycle operator who spoke to The Nation, said they pay N4,300 daily to touts who claim to be working for local councils.

A banker at Alafia, Amukoko said the protest restricted her from going to work.

The drivers’union lamented that they lose half of their income to motor park touts.

“The cost of transportation affects cost of goods and services and consequently the cost of living, which has spiraled astronomically in Lagos State as a result of the motor parks’ excessive and illegal ticketing and tolling at almost every bus stop.

“We have been sentenced to the extortion and violent harassment of the state transport agencies – Lagos State Motor Parks and Garages Management and Lagos State caretaker committee.

“On a daily basis, we lose half of our income to the motor park boys. We pay exorbitant charges in the garages and at every bus stop where we drop off passengers, whether we pick up passengers or not, we pay morning, afternoon and night. Some routes have 25 bus stops which also serve as illegal tax collection avenues.

“From Badagry to Mile 2, we pay N3,500 & N5,000 apart from 25 illegal tolling/ticketing by motor park hoodlums who collect N200 to N300 per bus. From Seme, they collect N7,100 in the morning before loading our buses, yet we are still subject to illegal collection on the highway.

“When we resist the extortion, we get arrested and pay N10,000 to the police to recover our vehicles while the motor park boys go scot-free.

“Lagos drivers also pay for entertainment, security, unit chairman’s food and many other ridiculous levies with threat of violence at any slight refusal by the drivers. This is our case: baboon dey work and monkey dey chop”.

“Our demands are: No to charging drivers three passengers’ fare after loading at parks or garages, we are demanding it should be one passenger’s fare per bus. We demand that only Lagos State government ticket should be the ticket. Others like Lagos State parks & garages management, Lagos State caretaker committee are not acceptable to all drivers in Lagos State.

“We kick against paying motor park thugs at every bus stop. All illegal money paid after we leave the garages and parks should be abolished immediately. Harassment by law enforcement agencies & intimidation with guns, cutlass, broken bottles by LASTMA, task force and RRS must end immediately. They collaborate and hire thugs to attack and extort us every day.

“We demand that the Lagos State government should provide official bus stops in each community to avoid incessant arrests and stress for commuters who complain of having to trek several kilometers back to their bus stops.

“We call on the Lagos State government to quickly respond to avert the current anomaly.”

The state government said it is looking into those issues, with a view to finding a solution to them.

Special Adviser to the Governor on Transportation Sola Giwa said the Ministry of Transportation invited leaders of the bus driver to a meeting on Friday.

Giwa said it was resolved that the meeting be adjourned till tomorrow to have a larger house since most of the prostesters were from the Badagry area.

The governorship candidate of Action Alliance in Lagos State Mr Tope Balogun called on Chairman of Lagos State Parks and Garages Management, Alhaji Musiliu Akinsanya aka MC Oluomo to quickly address the grievances of the bus drivers, adding that the strike action was avoidable.

The Parks and Garages Management urged the protesting drivers to channel their grievances to the appropriate quarters, adding that the MC Oluomo-led organisation had not received any communication on the alleged extortion and harassment.

Having suffered some defections in recent weeks, the ruling Progressives Congress (APC), has expressed pleasure with the decision…
byTayo Aderinola
No comments 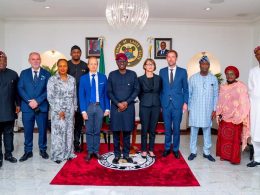 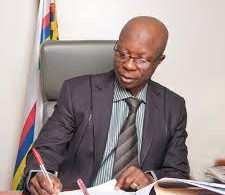