Captain Hosa Okunbor dies at 63, what you need to know about him

Edo State-born business mogul and Chairman of Ocean Marine Solution Limited, Captain Hosa Okunbor, is dead. He died in a London hospital at the age of 63 after battling with pancreatic cancer.

Edo State-born business mogul and Chairman of Ocean Marine Solution Limited, Captain Hosa Okunbor, is dead. He died in a London hospital at the age of 63 after battling with pancreatic cancer.

The business mogul was flown to London in August 2020 to receive treatment for his ailment. He was reportedly given 9 months to live at the time, but died exactly a year after.

Here are 11 things to know about late Captain Hosa:

2. Captain Hosa was a native of Edo State, he was born in Benin City to the family of Reverend Robert Amos Okunbo, a clergyman, teacher and community leader

3. He attended his primary education at Government Primary in Benin City, old Bendel State, now Edo State. He proceeded to Federal Government College, Warri, in 1971, where he sat for West African Senior School Certificate Examination. Okunbo was a native speaker of the Edo language, and a fluent speaker of English.

4. He was a business magnate, investor, philanthropist and trained commercial pilot.

5. He served as either chairman or director on numerous company boards in Nigeria, spanning multiple business sectors such as the agro-allied, petroleum, telecommunications, power, real estate and banking industries.

6. Okunbo pursued his desire to become a pilot by studying at the Nigerian Civil Aviation Training Centre, Zaria, Kaduna State, and became a professional commercial pilot at the age of 21. He also attended ACME School of Aeronautics, Fort Worth Texas in 1983, where he obtained an Airline Transport Pilot License.

7. Upon graduation, Okunbo became a professional commercial pilot and was made a captain in 1983 at 25. He was a flight captain with Intercontinental Airlines for about two years, then was employed by Okada Airlines for three years. In 1988, he retired from piloting at the age of 30, having logged over 7,000 hours of flight time, and ventured into private business.

8. On October 2, 2014, Oba Erediauwa, gifted Okunbo “with the ‘Traditional Beads’ for being a worthy son of the ancient Kingdom.

9. Okunbo was the founder and chairman of the following Nigerian companies:

*Westminster Security Solutions Nigeria Ltd, a franchise of Westminster Group Plc UK, of which he is major shareholder.

*Hoslyn Habitat Ltd., which is a design, construction and landscaping company.

10. Okunbo was a director in the following companies:

*Integrated Energy Distribution and Marketing Ltd. (IEDM), which is a core investor in Ibadan and Yola Electricity Distribution Companies.

*Okunbo was member of the Board of Directors of NatCom Development and Investment Ltd., which is the holding company Nigerian telecommunications giant NTEL.

11. Okunbo was married with 11 children

Just a few days ago, the apex court in Nigeria upheld the disqualification of the Deputy Governor-elect of…
byTayo Aderinola
1 share
1
0
0 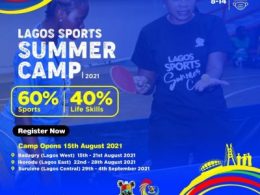 Lagos sports summer camp phase I kicks off in Badagry

The Lagos State Sports Commission has kicked off the Phase I, Season II of its annual Lagos Sports Summer Camp for Public and Private School Children between the ages of 9 and14 at the Badagry Grammar School, Badagry.
byLateef Idris