The Minister of Information and Culture, Alhaji Lai Mohammed, says the achievements of President Muhammadu Buhari’s Administration on infrastructure are unprecedented having spent a whopping sum of N2.7 trillion in two years.

The minister stated this on Monday at the inauguration of Sabke, Dutsi and Mashi water supply schemes in Daura, Katsina State.

The water schemes abandoned for 20 years was completed by the Buhari Administration and inaugurated by the Minister of Water Resources, Suleiman Adamu and Mohammed.

The project conceived and started in 1998 by the defunct Petroleum Trust Fund (PTF) headed by Buhari had been abandoned by successive administrations until 2005 when the President took over.

In his speech at the event, Mohammed said the project inauguration fitted into the ongoing agenda to showcase the achievements of the Buhari Administration, especially in the area of Infrastructure.

He recalled that the water project inauguration was the second in a week by the Buhari Administration, after the one inaugurated in Ugboha community in Edo State last Thursday

The minister also listed other projects he had inaugurated and inspected in showcasing the achievements of the administration.

“We then followed up by touring the Lagos-Ibadan Expressway, where work has been epileptic until this administration came into office

“Our next stop was the commissioning of erosion and deflooding project in Osogbo, an Ecological Fund project, last week, which has given the people of the Osun State capital a new lease of life.

“From there, we inspected the Oyo-Ogbomoso road, the Dualisation of which was awarded in 2010 and expected to be ready by 2013 but had been stalled due to lack of funds until this administration assumed office

“Today, we are here to commission three key water projects, details of which the Honourable Minister of Water Resources will provide shortly.

“What all these show is that this administration is delivering on its promises to ensure better life for Nigerians, irrespective of what the naysayers are saying,” he said.

Mohammed congratulated the Minister of Water Resources on the successful completion of the water schemes as well as the people, who will benefit from the projects.

He said the Buhari administration was on the right track for choosing to complete ongoing and abandoned projects instead of abandoning them as past governments had done.

“The administration believes that governance is about the well being of the people, and will continue to pursue projects that directly benefit the people,” he said.

Speaking in the same vein, the Water Resources Minister said the Buhari administration placed a lot of emphasis on activities that will improve the quality of lives of Nigerians.

“It is for this reason that the president has infrastructural development as one of the cardinal policy thrust of his administration,” he said.

He said with the inauguration of the water schemes incidences of water borne diseases will be curtailed, while sanitation and personal hygiene will be improved and income generation will be enhanced.

Gov. Aminu Masari of Katsina appreciated the President for the completion of the project and handing it over to the state.

The governor, who was represented by the Secretary to the state Government, Dr Mustapha Inuwa, assured that the state and the host communities would take ownership of the project. 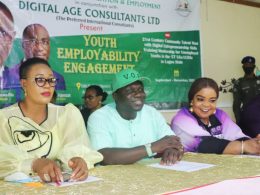 The Lagos State government through the Ministry of Wealth Creation is pursuing the vision of ensuring that Young people from the age of 18yrs are properly equipped with skills that will make them employable and self reliant.
byLateef Idris
No comments

The Honourable Member of the Federal House of Representatives, Ikeja Federal Constituency, Hon James Abiodun Faleke has empowered members of his constituency for the fourth time in less than 12 months on Wednesday at the Police College ground, Ikeja, Lagos.
byTayo Aderinola
No comments 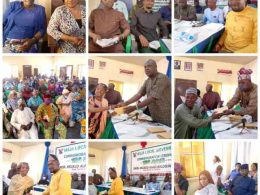