President Muhammadu Buhari, who returned to Abuja last night from AU Summit in Mauritania, is billed to hold bilateral talks with President Emmanuel Macron of France at presidential villa, Abuja, today at 4.00p.m.

The French leader would discuss issues bordering on security and terrorism with President Buhari.

Macron had on Monday in Nouakchott during the closing ceremony of the AU Summit met with the Nigerian leader.

Macron will after his engagement with Buhari visit the Afrika Shrine, a nightclub in Lagos founded by Nigerian music legend Fela Anikulapo Kuti.

`And he is not a stranger to Nigeria. He trained as a senior civil servant at the French Embassy in Lagos in 2004, seven years after Fela died.

Buhari on Monday night returned to Abuja after attending the 31st Ordinary Session of the African Union (AU) Assembly of Heads of State and Government, in Nouakchott.

The Minister of the Federal Capital Territory (FCT), Malam Muhammed Bello, Chief of Staff to the President, Malam Abba Kyari and some government functionaries welcomed the President at the presidential wing of the Nnamdi Azikiwe International Airport, Abuja.

The Senate on Thursday announced the suspension of all public hearings with effect from March 24, over the…
byTayo Aderinola
No comments

The Earth’s forests, deserts, landscapes and vital ecosystems risk a “major transformation” in the next century due to…
byTayo Aderinola
No comments 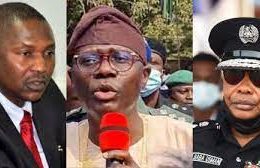 An unnamed Chief Superintendent of Police on Tuesday openly defied the order of the Lagos State Governor, Babajide Sanwo-Olu, to vacate the Magodo Phase 2 Estate area of the state.
byLateef Idris
No comments

Chidibere Nwadi, a petitioner at the Lagos judicial panel has said he hated the Nigerian police since 1999.…
byTayo Aderinola
No comments