Buhari tasks security chiefs on safety of all citizens

President Muhammadu Buhari has directed security agencies to safeguard the lives and property of all citizens and secure the nation’s borders from aggressors.

The  Chief of Defence Staff, Gen. Gabriel Olonisakin disclosed this to State House correspondents shortly after President Buhari met behind closed doors with members of the National Security Council in the Presidential Villa, Abuja on Tuesday.

Buhari on Monday in a broadcast to the nation charged the security agencies not to let the successes achieved in the last 18 months in the fight against insurgents “be a sign to relax”.

He said in the broadcast that “terrorists and criminals must be fought and destroyed relentlessly so that the majority of us can live in peace and safety.’’

Olonisakin, however, assured that the military would enhance operations in line with the President’s directive on securing the nation.

“We are going to enhance our operations in all the areas that we need to do that.

“Like I said he has given the necessary directives which will be carried out by the military and the security agencies.

“He also directed that we must ensure that the life and property of the citizens are protected and we must make sure that we secure the whole nation and also that troops that are outside carry out their jobs effectively,’’ Olonisakin stated.

Olonisakin revealed that the President reiterated his stance on the continued survival of Nigeria as one geo-political entity.

He said Buhari was also updated on all security issues within and around the country.

“We have been meeting with Mr President for the last three hours.

“We updated him on all security issues around the country, within the country and outside the country where our troops are (operating).

“He has been receiving regular briefings from the acting president and he has been going through the print media and electronic media to follow the happenings in the country,’’ he added.

The News Agency of Nigeria (NAN) recalls that the Service Chiefs were on July 27th ordered to return to command centre of the ongoing war against Boko Haram insurgency with a view to consolidating the gains being recorded in the battlefields.

The Chief of Naval Staff (CNS), Vice Admiral Ekwe Ite-Ibas, was represented at the meeting. (NAN) 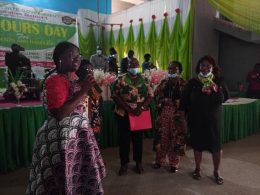 The Lagos State Education District One has honoured 101 Students and Teachers for distinguishing themselves in various competitions during the year 2021 Students' Honours Day organised by the District and held at Government Senior College Hall, Agege, Lagos.
byLateef Idris
No comments