Nigeria’s President Muhammadu Buhari Thursday met with the leaders of the ruling All Progressives Congress (APC) in London.

Both former governor of Lagos State and APC National leader Asiwaju Bola Tinubu and former national chairman of the APC, Bisi Akande, met with the president at Abuja House, London, according to a message from the official presidency Twitter account.

Buhari left Nigeria in January for London to “undergo routine medical check-ups” during a short holiday and was expected to resume work on February 6.But he later extended the vacation on the advice of his doctors, his spokesman, Femi Adesina said.

“President Muhammadu Buhari has written to the National Assembly today, February 5, 2017, informing of his desire to extend his leave in order to complete and receive the results of a series of tests recommended by his doctors,” Adesina said in a statement.

“The President had planned to return to Abuja this (Sunday) evening but was advised to complete the test cycle before returning. The notice has since been dispatched to the Senate President, and Speaker, House of Representatives.

“Mr. President expresses his sincere gratitude to Nigerians for their concern, prayers and kind wishes.”

Buhari’s current visit to London would make it the second time in less than a year he has gone there for medical treatment.

He visited London in June 2016 for treatment to what the presidency described as a persistent inner ear infection, which caused him to pull out of several scheduled engagements. But his latest visit, however, has been dogged by the rumours of his death.

The Bayelsa Governorship Election Tribunal has nullified the election that produced candidate of the Peoples Democratic Party’s (PDP),…
byTayo Aderinola
No comments

The Honourable Commissioner for Wealth Creation and Employment, Mrs. Yetunde Arobieke, has encouraged youths in the State to identify the needs within the environment and begin to proffer solutions to open the gateway of becoming entrepreneurs.
byLateef Idris
No comments 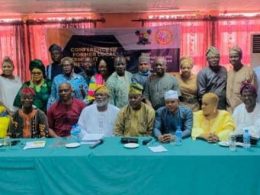 The Conference of Former Executive Secretaries of Local Governments and LCDAs in Lagos State has declared their support for the Presidential ambition of the National Leader of the All Progressives Congress APC Asiwaju Bola Ahmed Tinubu in the 2023 general elections at their general meeting held  on Thursday, at the event hall  Excellence Hotel, Ogba, Ikeja Lagos.
byTayo Aderinola
No comments

Members of the Academic Staff Union of Universities (ASUU) on Tuesday, were absent at a meeting called…
byTayo Aderinola
No comments