Al-Amin, who inspected the Zuba pilot scheme construction site, said the the project was 50 per cent completed.

He explained that none of the houses would be sold above N5 million and those interested should go through government mortgaging system, especially the FHA mortgaging.

“Initially, if you are paying for a house through mortgage system in the country, you will pay 30 per cent equity but government has wiped away the equity to zero equity for houses below N5 million.

“The project started three and half months ago, it is a mixture of one, two and three bedroom flats and a total of 550 units are to be produced and every side is at different stage of construction.

“We have the money in our account, government has approved and given out the money and we are releasing it according to the details of public procurement act.

“This is not the only place in Abuja that we are doing this, we have opened Kwali, in the next two weeks, and we are opening phase two of Lugbe housing estate for low income earners in Abuja.

He said that another aspect of the project was that the FHA had to know the level of income of off-takers, with a view to ascertain the kind of flat their income could enable them to obtain.

He further said that the authority decided to use affordable building materials to give the houses value and utility deserved.

According to him, locally produced materials are also being used in the housing construction.

Al-Amin noted that the sustainability of the mass housing scheme was very important, adding that in order for off-takers to access the houses, the authority had gone far to mobilise the off-takers.

“For Zuba social housing scheme, we are targeting communities around that area and spare parts dealers and other Nigerians who cannot stay in the heart of Abuja but stay in Zuba.

“Those are the people we have profiled.

“We have FHA mortgage bank which is willing to create mortgages for them, the demand for that estate is high.

Speaking on the poor state of the access road, he said that the estate had a direct road from Lokoja express way.

He added that FHA had awarded the contract for road infrastructure but asked the contractor to stop because of the raining season.

Al-Amin further explained that the Zuba project was meant to be a pilot project of “President Muhammadu Buhari Bricks“ which essentially entailed having houses for all categories of Nigerians.

NAN reports that the board members also inspected the FHA first phase of commercial housing estate which include luxury houses and duplexes in Apo, Guzape District, and Abuja.

According to him, the commercial housing estate which is 90 per cent completed is meant for higher income earners in Abuja.

Al-Amin noted that the authority had two types of housing productions: commercial and social housing in Abuja while in the remaining parts of the country it had commercial houses in each state capital.

He added that in other locations in states, the authority had social housing which could be let out as site and services.

“We want to ensure that every sector of the country is covered and every Nigerian, irrespective of status, has option to take.

This is based on the United Nations New Urban Agenda which emphasises housing inclusiveness. (NAN)

A major disaster that could have led to loss of lives was on Tuesday averted on Otedola Bridge,…
byTayo Aderinola
No comments 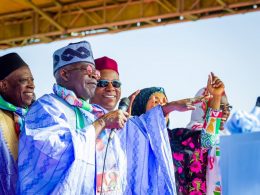 Ahead of the February 25 presidential election, the All Progressives Congress Presidential Campaign Council is planning an alliance with smaller parties in a bid to boost the chances of its presidential candidate, Asiwaju Bola Tinubu.
byTayo Aderinola
No comments