Two factions of the Boko Haram insurgency group may be ready for talks with the Federal Government, Abdulkadir Abubakar, a former commander of the group has claimed.

Abubakar, also known as Abu Muhammad, was the chief intelligence officer of the Boko Haram group and one of its top commanders, until his arrest in June by the military in Buni Yadi in Gujba local government area of Yobe State.

Abubakar told the News Agency of Nigeria (NAN) at his cell in Maiduguri that Albarnawi and Mamman Nur factions of Boko Haram were willing to dialogue and cooperate with the government to defeat the most visible leader of the group, Abubakar Shekau.

According to him, Shekau, whose capture, dead or alive, the military high command has ordered, has been the major obstacle to peace, since the insurgency began in 2009.

“Shekau is not willing to surrender due to his high handedness. Unfortunately, the government and military authorities accorded priority on dealing with Shekau, who is blood thirsty.

“Albarnawi has indicated interest to dialogue with the government to end insurgency and provide a lasting solution to the crisis. Albarnawi discusses this with members of his circle. And I can assure the government that he would cooperate to achieve peace.

“The two factions are willing to cooperate with Nigerian Government to defeat Shekau,” he said.

Abubakar’s claim about the readiness of the factions to dialogue with the Nigerian authorities could not be verified as he had been incarcerated since June. But he insisted that the groups are predisposed to a peaceful resolution of the eight year-old crisis.

Abubakar claimed to have undertaken various espionage missions and provided intelligence to the insurgents, which enabled them to
hit a long list of targets, among which were the abduction of 275 students at Government Girls Secondary School, Chibok and the massacre of students at Federal Government College, Buni Yadi. Over 20 students were murdered at Buni Yadi.

He also claimed to have been involved in other attacks on schools in Maiduguri,  Damaturu, Postikum and Mamudo.

The detained Boko Haram commander expressed his willingness to give the military useful information to crush the insurgents and arrest Shekau.

“I am cooperating with the military and I am ready to provide information on the whereabouts of Shekau. Shekau has left his enclave in Sambisa and moved deep into Mandara Mountain. I know the area where he is hiding and willing to provide a guide to the military.

“The intensified military offensive has weakened Shekau’s position and that of the other groups,” he added.

Abubakar revealed deep divisions and power struggle among the insurgents, claiming the Albarnawi and Mamman Nur factions were opposed to Shekau’s leadership style and his bloodthirstiness.

He also blamed Shekau for many attacks on civilians by the Boko Haram insurgents.

“During the early days of the insurgency we fought for what we thought was a just cause, to establish a caliphate where human beings are valued, cherished and respected.

“After annexing vast territories, Shekau began to demonstrate his cruelty and atrocities against humanity.

“In view of the high level atrocities committed by the group,some of the top commanders including myself, Albarnawi and Mamman Nur challenged Shekau, demanding an immediate end to the ugly saga.

“Thereafter, Albarnawi and Mamman Nur parted ways, and formed their groups. Shekau is responsible for suicide bombings and attack on soft targets in the North-East.

“The Albarnawi and Mamman Nur groups never attacked schools, religious places of worship, markets, women and children. Our fight was strictly with security forces. Even the kidnapped oil workers would not be killed by the group,” he said.

According to him, both Mamman Nur and AlBarnawi opposed the abduction of the Chibok school girls, women and children.

“Shekau is fond of using the girls and other abducted women as sex toys, and suicide bombers. He kills on the pretence of punishing for lies, theft, and rebellion. Shekau kills without justification.

“Shekau arrogated to himself the powers to accuse, prosecute, convict and punish in total contradiction to Islamic teachings.Children and women also starved to death in Sambisa due to  Shekau’s cruelty”, he said.

Comrade Adams Oshiomhole, the National Chairman of the ruling All Progressives Congress (APC) has led a delegation of…
byTayo Aderinola
No comments

In line with the reward system in place in the Lagos State Public Service, the Ministry of Information…
byTayo Aderinola
No comments 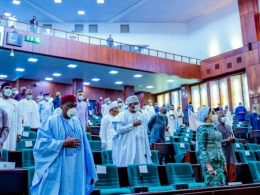 The House of Representatives on Monday announced that resumption of plenary has been postponed to June 7.
byTayo Aderinola
No comments