Lagos State Commissioner for Information & Strategy, Mr. Kehinde Bamigbetan has advised the management of the Ejigbo Local Council Development Area to mobilise the private sector to set up a Chamber of Commerce and industry that will support the businesses in the community.

Welcoming the LCDAs Business Summit Committee led by its Vice Chairman, Dr. Olatunde Olusunmade to his office on Wednesday, the Commissioner said the initiative would provide an institutional forum for engagement and interaction between the private and public sector on matters of common interest such as security, job creation and business growth.

Bamigbetan, who chaired the LCDA between 2008 and 2014, commended the initiative of the current administration of Alhaji Monsuru Bello for continuing the business-friendly policies by investing in security, jobs and vibrant business environment.

He recalled that while the challenges of his administration were to establish access of traffic in and out of the LCDA and support start-up businesses, the current administration needs to consolidate the position of Ejigbo as a business haven by partnering with the private sector.

He expressed his conviction that the benefits of the projects of the Lagos State Government in the Oshodi-Isolo axis such as the 10-lane Airport Road and the Oshodi Interchange would reach the residents of Ejigbo.

Responding, the Chairman of Ejigbo LCDA Business Summit, Dr. Olusunmade thanked the Commissioner for receiving the committee in his office at short notice.

Olusunmade informed that the summit has received the blessing of Captains of Industry and academics including Professor Pat Utomi who is to deliver the keynote address.

He also acknowledged the co-operation of the Lagos State Chamber of Commerce & Industry and corporate citizens based in Ejigbo such as Grooming, a credit company.

THE Lagos State Government on Sunday announced the reopening of two of its recreational parks for public use,…
byLateef Idris
No comments 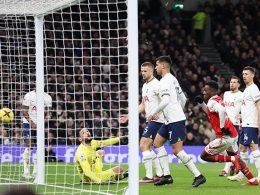 Arsenal powered to their first Premier League win at Tottenham in nine years as the leaders took advantage of Hugo Lloris’ blunder to seal a 2-0 victory in Sunday’s north London derby.
byTayo Aderinola
No comments

The Lagos State Head of Service, Mr. Hakeem Muri – Okunola has called on all tiers of Government…
byTayo Aderinola
No comments 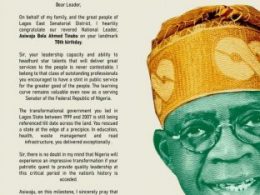