Ataga: Chidinma made her statement herself – witness

Madeyinlo made the statement while testifying as the second prosecution witness in the trial within trial to ascertain whether Ojukwu was coaxed or induced to make a statement that she killed Ataga by herself.

Ojukwu, a 300-level Mass Communication undergraduate of the University of Lagos, is standing trial for the alleged murder of Ataga.

She is also charged with stealing and forgery alongside one Adedapo Quadri and her sister, Chioma Egbuchu.

The News Agency of Nigeria (NAN) reports that Ojukwu’s counsel, Mr Onwuka Egwu, had objected to the admissibility of the defendant’s statement.

He said that the defendant did not make the statements voluntarily which made the court to go into trial within trial to ascertain the voluntariness of the defendant’s statement.

At the resumed hearing, the Deputy Director of Prosecution, Mrs Adenike Oluwafemi, called her second witness for the continuation of trial within trial.

Madeyinlo who had worked for 33 years in the police, said that on June 24, 2021, the Officer in Charge of the homicide session, Panti Yaba, Razak Oseni, brought the defendant to her office to write her statement.

She said that she gave the first defendant a statement form and a pen.

According to the witness, DCP Adegoke Bayoade, sent for Oseni, who left the first defendant in her office.

Madeyinlo said that about 40 minutes later, Oseni came back to her office and took Ojukwu’s written statement.

She said, “Oseni collected the statement and went away with the first defendant.

During cross-examination by Ojukwu’s counsel, the witness said that she shared her office with three other officers, ASP Gbolahon Jemiyo, ASP Gbola Alabi, and Insp. Kolawole Lukman.

When asked if it was after Jemiyo had assaulted the first defendant that her statement was taken, the witness said that she was in the office with only Alabi when the defendant wrote her statement.

Asked if she interacted with Ojukwu while she was writing her statement, Madeyinlo answered in the affirmative.

“I did not ask her any questions, she wrote her statement herself. The only question I asked her was if she was satisfied with the statement she wrote.

“She answered yes, then I asked her to sign it,” the witness said.

The witness said that she could not remember because the incident happened a long time ago.

Asked if she knew what happened to the statement the first defendant made on June 24, 2021, she said no.

However, Justice Yetunde Adesanya adjourned the case until Nov. 17, for the first defendant to testify in the trial within trial.

The Lagos State Governor, Babajide Sanwo-Olu, has congratulated the National Leader of the All Progressives Congress, Asiwaju Bola…
byTayo Aderinola
No comments 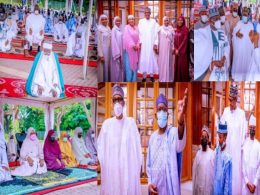 The Lagos State Government has dismantled an illegal slaughter slab in the Okerube area of Alimosho Local Government,…
byTayo Aderinola
No comments