Arik Air Limited has filed a N20 billion suit against the Federal Ministry of Transport, Attorney General of the Federation and Ethiopian Airlines over recent claims in the media that negotiations have begun for the acquisition of the airline by the latter.

Recall that the airline was taken over by the  Asset Management Company of Nigeria (AMCON)  in February this year over poor management, inability to service its debts and pay employees’ salaries.

The airline through its counsel, Babajide Koku (SAN), Mr. Chukwuemeka Nwigwe and Mrs. Ezinne Emedom, on September 6th, filed the lawsuit at the Federal High Court Lagos and is asking the court to stop the Federal government and the Ethiopian airline from further negotiations for its acquisition. Part of the 20-paragraph court paper reads

Verifiable Information has shown that the Human Rights Activist, Chief Sunday Adeyemo popularly known as Sunday Igboho has arrived Ogun State this afternoon and is battle ready to face the suspected Fulani terrorists who are making lives unbearable for the people of Gate way state.
byTayo Aderinola
No comments 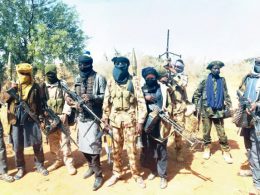 Terrorists who kidnapped passengers on the Abuja-Kaduna bound train that was attacked on 28th March 2022 have urged the government to release their children allegedly kept in a Yola detention facility.
byTayo Aderinola
No comments