The Caretaker/Extra-Ordinary Convention Planning Committee (CECPC) of the ruling All Progressives Congress (APC) has distanced itself from a zoning arrangement list in circulation.

The Caretaker/Extra-Ordinary Convention Planning Committee (CECPC) of the ruling All Progressives Congress (APC) has distanced itself from a zoning arrangement list in circulation.

The zoning arrangement for major national elective offices and for positions in the party’s National Working Committee (NWC) allegedly released by the party went viral on social media.

But the Secretary of the Caretaker Committee of the party, Senator John James Akpanudoedehe disowned the list.

He maintained the party will required to make extensive consultations before such arrangement would be arrived at, adding zoning of offices is yet to be on the table of the Caretaker Committee.

“I want to mute the speculation. The list is not from us ( Caretaker Committee). The President is not in town.

“There is no way such decision will be taken without consulting with the President, consult with the governors and other major stakeholders.”

He blamed the list on circulation on individuals interested in contesting for one office or the other in the party, insisting the Caretaker Committee cannot be pressurised into taking wrong decision. 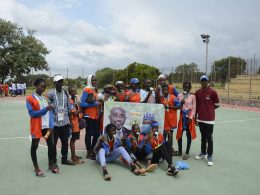 Team Sokoto on Monday dislodged Team Lagos in the final of the male Handball event at the ongoing National Youth Games in Ilorin.
byLateef Idris

The Tijaniyah, a Sufi order, has appointed a former Emir of Kano Muhammadu Sanusi II as the new Caliph in Nigeria.
byLateef Idris

A Non-Governmental Organisation (NGO), the Centre for Disabilities Issues (CDI), has condemned the shooting of protesters in Lekki,…
byLateef Idris