One of the bonded terminals sealed

The Lagos State Building Control Agency, LASBCA, at the weekend shutdown five illegal Bonded Terminals and five other buildings in Ajegunle area of the state.

Governor Akinwunmi Ambode had last last week ordered all illegal bonded terminals in Ajegunle, in Ajeromi Ifelodun Local Government to be shutdown as they constituted nuisance and contributed to the gridlock in Apapa area of Lagos, Southwest Nigeria.

Officials of LABSCA, escorted by Task force officials stormed the area in the morning and shutdown the affected terminals and structures.

The popular Godday Cinema that had existed for decades in Ajegunle was also shutdown by the government officials, while buildings converted from residential to commercial purposes were shutdown.

The General Manager, LASBCA, Engr. Lekan Shodeinde, represented by the Agency’s Secretary, Mr. Tayo Fakolujo said the exercise was part of the efforts of the State to ensure that building development in the state followed the approved layouts of the areas and due process.

He stated that the government, in its quest to put the State in the pedestal of other smart cities in the world, was making Lagos city a well-planned and structured society where buildings were constructed according to its building plan approval granted by its sister Agency, Lagos State Physical Planning Permit Authority (LASPPPA).

Shodeinde hinted that all bonded terminals operating within the residential areas would be sealed up and that the genesis of Apapa gridlock was as a result of indiscriminate citing of tank farms and bonded terminals in the  areas without an approval from the State government.

He, however, said with the new monitoring and auditing of building exercise in the State, the wrath of the law would be on any recalcitrant operator of a terminal or owner who converted the residential buildings to commercial usage without any recourse to proper regularization, engineering appraisal of the building and that the Master plan of the area would be prosecuted accordingly to stem the tide of non-conforming and unplanned development in the state.

He stated that “Instant mobile court is on ground to prosecute any recalcitrant defaulters”.

Speaking during the exercise, one of the residents of Dada Onijomo Street, Awodi-Ora in Ajegunle , Mrs Taiwo Aina said that since the citing of bonded terminals in that area, the community had known no peace as a result of indiscriminate parking of  trailers on the streets.

Also, Mr.Collins Chukwuemeka one of the residents of Osho Drive at Kirikiri road, Olodi-Apapa said that the root cause of traffic gridlock around the area was as a result of bonded terminals, adding that the area had lost its glory as trailers and motorists had turned the area into dumping ground for containers.

The Federal Government has said that Sheikh Ibraheem El-Zakzaky, the leader of the Islamic Movement of Nigeria (IMN),…
byTayo Aderinola
No comments 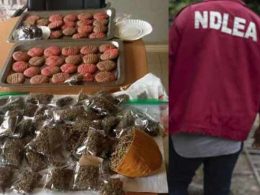 NDLEA intercepts baked cakes made with Cannabis on Lagos-Ibadan expressway

The National Drug Law Enforcement Agency (NDLEA) in Oyo State has intercepted baked cakes made with cannabis sativa on the Lagos-Ibadan Expressway.
byLateef Idris
No comments

Lagos State Governor, Mr. Babajide Sanwo-Olu has asked the Jerusalem returnees who embarked on Holy Pilgrimage with the…
byTayo Aderinola
No comments

Mr. Governor of Lagos State, Babajide Sanwo-Olu in view of the disaster resulting from the pipeline vandalization of…
byTayo Aderinola
No comments