In the main event of UFC 281 from Madison Square Garden, Alex Pereira defeated Israel Adesanya via a fifth-round technical knockout to cap a meteoric rise to the UFC middleweight championship.

In the main event of UFC 281 from Madison Square Garden, Alex Pereira defeated Israel Adesanya via a fifth-round technical knockout to cap a meteoric rise to the UFC middleweight championship.

Both fighters jumped right into the fight without any delay. Like you would expect from seasoned adversaries, the two traded blows in the opening round.

Pereira was more often the aggressor, but Adesanya was quick with counters of his own. The Last Stylebender’s flush right hand and left hook at the very end of the round, which might have ended the fight if the bell hadn’t sounded, marked the most notable exchange of the round.

Pereira successfully recovered and had plenty of strong moments in the second round. He scored early and often with a stiff jab and even ended the round with a surprise takedown.

In the third round, it was Adesanya’s turn to showcase his grappling skills in a rare display. He scored a takedown off the clinch and spent a lot of the round with control of Pereira’s back.

Through the fourth round, Adesanya seemed to be on autopilot, but in the fifth, Pereira put a stop to that notion by pummeling Adesanya with several hard punches, including a left hook that brought to mind their kickboxing match.

Pereira continues to have Adesanya’s number across combat sports. The Brazilian won both encounters between the two men in the kickboxing ring, knocking Adesanya out in the second.

It turns out that Pereira’s kickboxing and strength have translated perfectly to the MMA cage.

Pereira only needed seven professional fights and three wins in the UFC to earn a crack at Adesanya. Now, he’s the champion.

The defeat puts an end to Adesanya’s stout hold on the middleweight division. He was going for his sixth consecutive title defence and will likely have an immediate rematch if he wants it.

However, Pereira predicted before the fight it isn’t something the Nigerian will be interested in.

“It makes no difference who they want to put after [to challenge for the belt],” Pereira said in an interview with the website, MMA Junkie. “He deserves it, but after this fight, he isn’t going to want it.”

Adesanya has a strong sense of competition, so it’s difficult to imagine him passing up a fourth chance to defeat a foe who has consistently been a pain in his side. 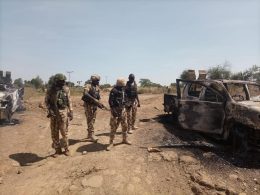 Wanted Senator Dino Melaye reported that he was stopped from boarding a flight to Morocco this morning, after…
byTayo Aderinola
No comments