Ambode, according to various reports, is currently embattled by factional politics of the Lagos All Progressives Party, APC

Peoples Trust, is a new mega party recently adopted by Nigeria Intervention Movement, NIM, a platform popularly acclaimed as the biggest political movement of fresh breed leaders of the third force movement in the country.

In a statement Friday after the election of its state executives, its Protem State Publicity Secretary, Dr Segun Awe Obe said Ambode should be encouraged to consolidate the great development he has started in Lagos

“Ambode has proved to be a wizard of development in Lagos, therefore should not be sacrificed on the altar of political intrigues and interests within Lagos APC. So, we as the platform of the fresh breed credible third force stakeholders in Nigeria have mobilised 30 other political parties in our grand coalition to engage him for the purpose of fielding him in the 2019 if APC in Lagos rejects him”
.
“The People’s Trust, a product of the political longsuffering of the Nigerian Youths and masses with over 500 thousands permanent voters carders, PVC’s of its members in Lagos is set to adopt Ambode as its governorship candidate in Lagos if the Tinubu led camp of APC rejects him

“For us in the Lagos People’s Trust, Ambode is a fresh breed industrious and resourceful Governor, who has since changed the face of Lagos within the shortest possible time and should be encouraged to complete his second term in the interest of the welfare of the people of Lagos, which he has started’ to do”

The new Lagos Exco of PT is made up of Lady Omowunmi Bajulaiye as Chairperson, Mr Ireti Duduyemi, Secretary, Dr Segun Awe Obe, Publicity Secretary among others elected at the meeting, where the party vowed to take over Lagos in 2019

. Alhaja Sikirat Ejide receives staff of office, implores to rise to the responsibilities of office
byLateef Idris
No comments 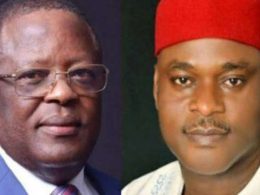 The Federal High Court sitting in Abuja, on Tuesday, sacked Governor David Umahi of Ebonyi State, his Deputy, Dr Eric Kelechi Igwe, and seventeen lawmakers of the Ebonyi State House of Assembly following their defection from the Peoples Democratic Party, PDP, to the ruling All Progressive Congress, APC.
byTayo Aderinola
No comments

Popular actress Omotola Jalade Ekeinde, also known as Omosexy, has revealed that she has tested positive positive for…
byTayo Aderinola
No comments