The All Progressives Congress, Ikeja Executive Committee was inaugurated today at the party secretariat at Anifowoshe, Ikeja, Lagos.

The Chairman, APC Ikeja Chapter, Alhaji Dally Adekunle Adeokun started the event with his opening remark which eulogized the party leadership in Ikeja namely Asiwaju Bola Tinubu, Chief Mrs Kemi Nelson, Chief Funso Ologunde and all other leaders and members for ensuring rancor free congresses at the wards and Local Government. Adeokun also expressed his gratitude to his predecessor Comrade A.B. Dania and former executives for ensuring the party recorded victories at the general elections they superintended. He promised to ensure, with the support of the leadership, executives and the Council Chairman, Hon. Mojeed Balogun to help increase the party’s fortune at the coming general polls.

He also noted “We are going to ensure a symbiotic relationship with the party leadership, executives and more importantly the Council Chairman and Councillors for the growth of the party. Firstly, we renovate our secretariat to be more befitting of Ikeja’s status with the aid of contributions from party leadership which we have already sent letters to some of them” he stated.

The inauguration started with the swearing-in of the Legal Adviser, Barrister Bolanle Adeola who in turn swore-in other executives and ward chairmen.

The Lagos State Ferry Service (LAGFERRY) has flagged off a 2-day workshop with the theme; COVID-19 Economy: Resilient Sailing for Sustainable Economy for A Greater Lagos. Organized for the Management staff of the agency at the Mile 2 Jetty Lagos on Saturday.
byTayo Aderinola
No comments

Lagos State Government on Thursday announced that it would be closing down Jonathan Coker axis, Ifako-Ijaiye, on Saturday…
byTayo Aderinola
No comments 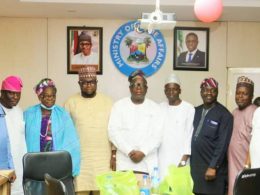 The Hon. Commissioner, Lagos State Ministry of Home Affairs, Prince Anofiu Olanrewaju Elegushi has inaugurated the Chairman and members of the Muslim Pilgrims Welfare Board.
byLateef Idris
No comments