He made the call in Owerri, the Imo State capital, on Monday while declaring open the three-day Conference and Retreat for Senior Police Officers.

”As I have often observed, elections are local, and it is only when the votes truly count that the faith of the citizens in the democratic process can be demonstrated and government legitimacy assured,” presidential aide Garba Shehu quoted the President as saying.

”This can best be guaranteed through well-policed election and security operations that are impartial, firm, and professional.

”This is what, on this day and occasion, I charge the Nigeria Police Force to deliver to the nation during the 2023 General Elections.

”I, therefore, task the Inspector General of Police to sustain his leadership standards that will guarantee a level playing field, and secure public space for the citizens to freely exercise their franchise, and for the outcome of the elections to be a true reflection of the people’s choices.”

Buhari said his administration will continue to support the police, citing several reforms introduced by his government to better the Force.

”My desire is to restore the primacy of the Police towards rebuilding public trust and professionalism,” the Nigerian leader added.

”My vision is also to bequeath to the nation a Police Force that is not only modernized, but well-funded, suitably equipped, and appropriately re-oriented to effectively police our democracy and guarantee a stable internal security order under a citizen-led, technology-driven, rule of law guided by intelligence-based policing Models.

”I am inspired that by our reform initiatives, we have laid a solid foundation towards the restoration of the operational competence and professional efficiency of the Police.”

As far as he is concerned, the initiatives are already yielding results as he cited the performances of the Police in recent off-season elections which he expects to be replicated next year.

”I am also pleased to note that our Police, in conformity to my democratic visions, and in the manifestation of the positive impact of these reforms, has in recent times been demonstrating high professional, ethical and operational standards as reflected in their performances in internal security operations and during the recent off-season electoral outings in Edo, Anambra, Ekiti, and Osun states.” 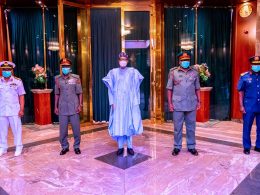 President Muhammadu Buhari on Wednesday met with the newly appointed Service Chiefs at the Presidential Villa, Abuja with a directive that they should rise up to the nation’s current security challenges.
byTayo Aderinola
No comments 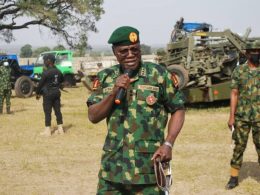 The Chief of Army Staff (COAS), Lt.-Gen Faruk Yahaya, has said the 5,800 recruited soldiers would be posted at various theatre operations to tame persistent insecurity bedeviling some parts of the country.
byTayo Aderinola
No comments