2023 Presidential Election: Why I chose Shettima as running mate – Tinubu

The presidential candidate of the All Progressives Congress, Asiwaju Bola Ahmed Tinubu, has explained why he chose the former governor of Borno State, Kashim Shettima, as his running mate in the 2023 presidential election.

The presidential candidate of the All Progressives Congress, Asiwaju Bola Ahmed Tinubu, has explained why he chose the former governor of Borno State, Kashim Shettima, as his running mate in the 2023 presidential election.

Tinubu, who met with the leadership of the Christian Association of Nigeria in Abuja on Wednesday, said the choice of Shettima was strategic not religious.

Explaining to the CAN leadership Tinubu said, “Choosing a Christian running mate would have been easy but that is not the case.

“My choice of Shettima is borne out of the urgent need to address the challenges facing the country and Shettima possesses strong leadership abilities which he exhibited when he was the governor of Borno State. I wanted a progressive government that was why I selected Shettima.

“We have urgent challenges that do not depend on religious leanings but on the best of hands that can address it,” he added.

Tinubu, who attended the meeting with his wife, Remi, assured the leaders of the association that the Muslim-Muslim ticket of the APC would not be a problem.

The presidential candidate added that he would replicate what he did in Lagos at the federal level by working in the interest of everyone.

He said, “I seek to become Nigeria’s president not on religious grounds but on the constitution. Thanks to the body for the invitation to candidates to speak on their plans for the nation.

“I believe in the need for a secular government and for us to work in the interest of the country just as I did in Lagos State. I partnered with the Christians to improve lives and foster education. I returned missionary schools to the rightful owners, most of which were Christians.” 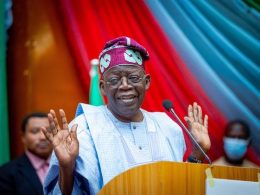 Tinubu is an elephant, he can’t step down for a Lilliputian – Shettima

The Director-General, Asiwaju Bola Ahmed Tinubu Campaign Organisation, Kashim Shettima has said Tinubu, as an elephant in the room cannot step down for a Lilliputian.
byTayo Aderinola
No comments 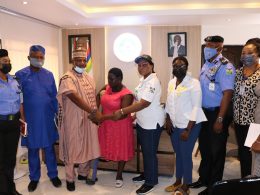 The Lagos State Government has handed over Mary Daniel, the amputee sachet water hawker, to the leader of the Igala (Kogi State) community in Lagos State.
byTayo Aderinola
No comments