The Bola Ahmed Tinubu Solidarity (BATS) Team has formally inaugurated the National Council of the support group and flagged off the door-to-door campaign for the All Progressives Congress, APC, Presidential Candidate, Asiwaju Bola Ahmed Tinubu and his running mate, Sen Kashim Shettima

The Bola Ahmed Tinubu Solidarity (BATS) Team has formally inaugurated the National Council of the support group and flagged off the door-to-door campaign for the All Progressives Congress, APC, Presidential Candidate, Asiwaju Bola Ahmed Tinubu and his running mate, Sen Kashim Shettima

The National President BATS Team, Arch Oladayo Adegbite in his keynote address before unveiling campaign materials, stated that the organization is already well established in 26 states of the federation, across the six geopolitical zones and is ready to commence the door-to-door campaign for the victory of the APC flagbearer in the forthcoming presidential election.

The well-attended inauguration at the Organization’s Secretariat, at Omole Phase II, had delegates and executives from several other states including Oyo, Ogun, Osun, Edo, Lagos among others.

Arch Adegbite urged all the State Executives and delegates to shun violence but propagate the good works and antecedents of Asiwaju Bola Tinubu.

He alluded that “Our principal is the most saleable of all the candidates, his political and antecedents and goodwill makes him stand far above others, hence, mobilize all our people in all our already dominating states and Federal Capital Territory to go all out and sell the good deed of Bola Ahmed Tinubu, who made Lagos the mega city it’s today”

“We need a leader with a clear vision, understanding of our plight and capacity to deliver and make Nigeria great again”.

The goodwill message from the Global Director, Ibrahim Haruna, who is based in Canada, was read by the Secretary of the group, said the diaspora team is working to support the good cause, and also mobilizing Nigerians abroad to promote the candidature of the former Lagos State Governor.

The Director of BATS Team Lagos State Chapter, Prince ‘Yemi Adebowale while speaking with Lagos Panorama, said “Our candidate pedigree makes it easier for us, the renewed hope is all that we need now to put Nigeria back on track, and Asiwaju Symbolizes that renewed hope we’re all yearning for and by God’s grace come February 2023 he and his running mate, Senator Shettima shall emerge the President and Vice President of Nigeria” he prayed.

The Spokesperson for the support group, Comrade Tayo Aderinola that the 2023 Presidential Election can liken to the 1993 election, hence the similarity in the mantra and manifesto.

Aderinola emphasized that “the mantra Hope 93 and the Renewed Hope 2023 similarity is not a coincident but a deliberate aim to deliver the required dividend of democracy as planned by Chief MKO Abiola and his team, and don’t Asiwaju Bola Tinubu was an active member of the team”.

The National Women of BATS Team, Mrs. Toyin Karokatoshe noted that the APC candidate is a great supporter of Women in Politics.

Mrs. Karokatoshe said “In the 26 states and FCT where we’ve established great numbers of followership, we’ve started mobilizing our women in support of Asiwaju Bola Tinubu and Shettima, because Tinubu has always supported the cause of women in politics”

The National President later unveiled the campaign materials to the admiration of all in attendance and was later distributed to the state chapters by the National Director of Strategy and Logistics, Comrade Olawale Ishola

The ruling All Progressives Congress (APC) has rescheduled its National Convention for Saturday, June 23, 2018. The party…
byTayo Aderinola
No comments 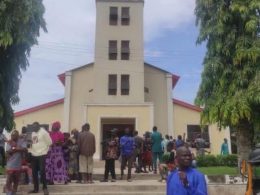 Suspected attackers of the St. Francis Catholic Church in Owo, Ondo State, have been reportedly arrested.
byLateef Idris
No comments 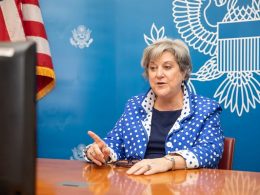