President Muhammadu Buhari on Saturday said he looks forward to the peaceful conduct of the 2023 general elections as his administration gradually winds down.

President Muhammadu Buhari on Saturday said he looks forward to the peaceful conduct of the 2023 general elections as his administration gradually winds down.

While the presidential and National Assembly polls will hold on February 25, 2023, those of governorship and States Houses of Assembly are slated for March 11 next year.

Speaking during a Sallah homage to the Emir of Katsina, Abdulmumini Kabir Usman at his palace in Katsina, the President pledged to tackle the security challenges facing the country.

He also promised to fix other sectors of the economy before the completion of his administration on May 29, 2023.

“All I hope is for a peaceful conduct of the 2023 general elections as done in the APC primaries.” President Buhari said.

“I have been attending appeal court for three consecutive times regarding election from 2003 to 2012. I was finally lucky after Nigerians reasoned with me and voted for me in 2015.

“Thank God we are doing our very best; I am praying that God will once again give us the wisdom to do more for the betterment of our people.”

Buhari prayed that God will give him the wisdom and courage to deal with those behind Nigeria’s insecurity.

He expressed optimism that the citizens will understand the situation leaders always find themselves in, soliciting the support of Nigerians and asking citizens for good prayers and justice.

In his short remarks, the Katsina State Governor, Aminu Masari said that the issue of security is everywhere in the world, saying Nigeria is not an exception.

Masari however noted that prayer is the solution to all problems, urging Nigerians to always submit themselves to God. The Super Eagles fought valiantly to get even as the game wore on, to no avail, and were then open to a sucker punch as Seidu Suraj unleashed a shot from close range that Adewale could only punch into his own net with four minutes left. The result leaves the Super Eagles B with some work to do ahead of the return leg, as both teams square off again at the MKO Abiola Stadium, Abuja on Saturday evening.
byTayo Aderinola
No comments 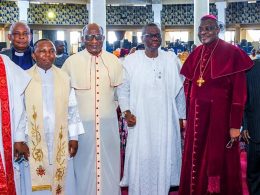 Lagos State Governor, Mr. Babajide Sanwo-Olu on Wednesday assured Lagosians, especially the people of Ikorodu division of the State that the Ijede/Itamagun Road in Igbogbo/Baiyeku Local Council Development Area (LCDA) will be commissioned in May.
byLateef Idris
No comments