Ahead of the 2023 General Elections, one of the prominent elders in the Peoples Democratic Party, PDP, in Sokoto state, Sahabi Bojo-Bodinga, had defected to the All Progressives Congress, APC.

Ahead of the 2023 General Elections, one of the prominent elders in the Peoples Democratic Party, PDP, in Sokoto state, Sahabi Bojo-Bodinga, had defected to the All Progressives Congress, APC.

Mr Bojo-Bodinga, a PDP stalwart from Sokoto South Senatorial District was received by the APC leader in the state, Aliyu Wamakko at his residence, on Friday in Sokoto.

This is contained in a statement issued to newsmen in Sokoto on Saturday by Bashar Abubakar, the special adviser, New Media to Mr Wamakko.

Mr Abubakar said the event was witnessed by Maigari Dingyadi, the minister of Police Affairs, Ahmad Aliyu, the APC governorship candidate in the state and many other prominent APC loyalists.

He quoted the state APC chairman, Isa Sadiq-Achida, while speaking on behalf of the party as assuring the new member and his supporters of equal treatment with all other members.

This is a great development for our party and I am certain that with the caliber of personalities the APC has continued to received ahead of the General Elections, we are truly blessed.

“I am truly confident that the defection of Bojo-Bodinga, is a good omen for the APC and an indication of the party’s victory at all levels,” he said.

On his part, Mr Bojo-Bodinga said he and his teeming PDP supporters across the state had left the party for APC for good

Lagos State First Lady, Dr Ibijoke Sanwo-Olu on Thursday rolled out the state government's ambitious exercise designed to generate demand and screen 210,000 women for cervical cancer in Lagos State free of charge by the end of 2021.
byLateef Idris
No comments

The Chief Army Staff, Lt.-Gen. Tukur Buratai on Thursday met with Media Executives and solicited their support in…
byTayo Aderinola
No comments 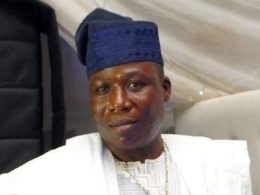 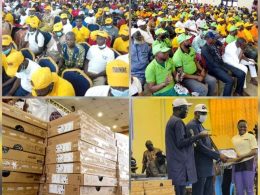 Member representing Ikeja Federal constituency at the House of Representatives, Rt. Hon. James Abiodun Faleke empowers constitutents in Ikeja federal constituency in a one-week capacity development programme as over 900 shortlisted constituents participated and benefitted from one training programme or the other.
byLateef Idris
No comments