Indigenes of Lagos East Senatorial District of Lagos State, from Epe and Ikorodu divisions, have vowed to mobilize massive votes for all candidates of the ruling All Progressives Congress (APC) during the 2023 general elections.

Indigenes of Lagos East Senatorial District of Lagos State, from Epe and Ikorodu divisions, have vowed to mobilize massive votes for all candidates of the ruling All Progressives Congress (APC) during the 2023 general elections.

According to a report by The Nation, ahead of the 2023 general election in the country, indigenes and residents of Epe and Ikorodu divisions in Lagos East Senatorial District of Lagos State, have declared total support for the candidates of the ruling All Progressives Congress (APC) across the state, especially the presidential candidate, Asiwaju Bola Ahmed Tinubu and Governor Babajide Sanwo-Olu of Lagos State, who is seeking re-election on the platform of the party.

Vowing to mobilize massive votes for Tinubu, Sanwo-Olu and all other candidates of the ruling APC during the 2023 general elections, the people of Ikorodu and Epe, in separate statements, called on other voters across the state to go all out and support the ruling party’s candidates at the polls so as to ensure the continuity of the good governance currently being enjoyed in the state. They assured Nigerians that Tinubu will replicate his performances in Lagos when elected President

Indigenes of Epe division, under the auspices of Epe Progressive Indigene for Good Governance (EPIGG), expressed the readiness of the people of the division to vote en-bloc for Tinubu, the presidential candidate of APC and National Leader of the ruling party, in the 2023 presidential poll. Olayemi Orunbon, the Coordinator of the group, declaring this after a special meeting of the group, held in Epe, Lagos, reiterated their commitment to vote for the party during the 2023 general elections.

“We are in APC Lagos State and we will remain bona-fide, patriotic and committed members of APC Nigeria come what may. We are not ethnic bigots, we believe in one Nigeria. In America there are Democrats, there are Republicans and other political parties. Democrats and Republicans exist in every state in America. Minus the Red Indians, other Americans today are immigrants. They came from diverse cultures across the world; the Europeans, Africans, Indians, Jews, Latin, Hispanics, Arabs, Russians, Asians, among others and they all melted into the American pot.

“That notwithstanding, they still to recognize till date who they are and where they are coming from. This is diversity. This is democracy. It is a free choice. We are Epe indigenes in APC Lagos. We do everything together here, Epe people are progressive, not retrogressive, Asiwaju Bola Tinubu is our ma, mentor and our father, we all believe in him, that’s more reason we are going to vote for him massively.

“Lagos is home of progressive and we have been witnessing it since he governed the state in 1999-2007, till date Lagos is on the right track, we won’t deviate or do otherwise. We will vote for APC presidential candidate in 2023. His name is Asiwaju Bola Ahmed Tinubu. This is democracy. We cannot do it alone. Politics is a game of numbers. You cannot box yourself to a corner and expect others to come and beg you, we need to do altogether. Everything is earned through dint of hard work,” Orunbon explained.

Another group within the division, Epe Pentecostal Movement (EPM) said it is important for Lagosians to support the presidential ambition of Asiwaju Tinubu and the reelection of Governor Sanwoolu. According to the Chairperson of the group, Lady Evangelist Esther Ayodele Tobun, “the exemplary performance of the Tinubu political family in Lagos State since 1999 is enough reason for us to not only support APC but to also canvass others to support the party during the 2023 general elections.”

Speaking on the controversial issue of the Muslim Muslim ticket, Tobun urged Nigerians to look beyond religion and pick competence, achievement, adding that Tinubu is not a religious bigot. “We are Pentecostals and we are Christians. But beyond that, we are Nigerians who have the opportunities to live in Lagos and experience, first hand, the performance of Tinubu and Sanwoolu. It is for this reasons we are saying we must not put religious or ethnic considerations over and above performance, competence and achievement,” she said.

In a related development, a group, a socio-political group, Ikorodu Division Solidarity Movement (IDSM) has expressed support for Tinubu and the second term bid of Governor Sanwo-Olu in 2023 general polls. The group also endorsed the re-election bid of Senator Tokunbo Abiru, describing him as a ‘worthy representatives of the people who put all his energy and resources into meeting the needs of his constituents since his emergence as the Senator in Lagos East. To put it mildly, Abiru has redefined representation in Lagos East with his good deeds.”

Briefing newsmen after an endorsement meeting held on Friday, acting spokesperson of the group, Olayemi Alaba-Sholebo, said the group resolved to support all the APC candidates in the state as well at the forthcoming general elections. “Among those jostling to get the presidency, Asiwaju Bola Ahmed Tinubu stands head and shoulder above the rest. For the presidency, in our honest opinion, Tinubu is the impeccable choice. We are aware of his achievements in Lagos in times past and contributions to modern Lagos.

“Lagos today serves as a refuge to other Nigerians who are fleeing from the farcical misrule and gross incompetence in their home states. Lagos is not playing this role by accident. We are not unaware of Tinubu’s influence and input in national issues. All the above have given us impetus to give him necessary support to win the presidential election next year because we are convinced he won’t disappoint the citizenry. Tinubu knows the enormity of what’s at stake in the country now. We are supporting Asiwaju’Tinubu because we know he has the capacity to serve all Nigerians in equal measures.

“When Tinubu is elected president, he will be a Nigerian first before being a Yoruba man, and he did demonstrate this cosmopolitan carriage when he was Lagos governor. Nigeria needs a team player and a good manager of men and resources to man its affairs going forward. We do not deserve a micro-manager as President. We need a man who can open up the space of governance for more capable and willing ahnds to come in and help turn the various sectors around. Tinubu has the ability to assemble men and women of influence whether within the nation or outside the country. This is why we are supporting his aspiration and urging all well meaning Nigerians to cast their votes for him,” the group said.

Calling for the ‘unconditional’ return of Babajide Sanwo-Olu as the Governor of Lagos State for a second term, the group said the APC candidate has shown capacity and foresight in his first term in office and as such, should be allowed to consolidate on the good works of the last four years. Alaba-Solebo said IDSM endorsed Sanwo-Olu because of how he was able to ensure the state remained above the curve economically despite the COVID-19 pandemic. He added that the good people of Ikorodu are appreciative of the governor for ensuring that workers in Lagos didn’t miss their salaries for a single day and for his people- friendly policies of the government. 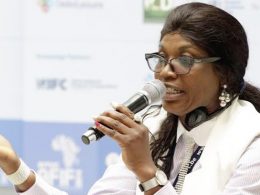 2023: Why next Lagos Governor should be a woman – Oyefusi

A Peoples Democratic Party (PDP) chieftain in Lagos State, Princess Abiodun Oyefusi, has called for the emergence of a female Governor in 2023.
byLateef Idris
No comments

Gov. Akinwunmi Ambode of Lagos State on Thursday assured that all housing schemes spread across the state would…
byTayo Aderinola
No comments

The Centre for Transparency Advocacy, an accredited observer group, has called on the Independent National Electoral Commission (INEC)…
byTayo Aderinola
No comments

N100b Sukuk bond proceeds to be spent on roads

The Minister of Finance, Kemi Adeosun, has disclosed that proceeds of the N100 billion Islamic bond, Sukuk, will…
byTayo Aderinola
No comments