The All Progressives Congress, APC, Presidential Candidate Asiwaju Bola Ahmed Tinubu on Saturday in Warri hit at the Peoples Democratic Party (PDP) for failing to develop Delta State despite the huge resources accruing to the state.

The All Progressives Congress, APC, Presidential Candidate, Asiwaju Bola Ahmed Tinubu on Saturday in Warri hit at the Peoples Democratic Party (PDP) for failing to develop Delta State despite the huge resources accruing to the state.

While addressing the rally, Tinubu accused the opposition party of abandoning infrastructural development in the state and leaving the state to rot away.

He said: “Delta is among Nigeria’s largest oil and gas producing states. Revenue from oil and gas has historically been the backbone of government revenue and foreign exchange earnings.

“As such your state and other oil producers have made a one-of-a-kind financial contribution to the building of modern Nigeria. The nation is thankful to you.

“Delta has all it takes to be great and help lead the nation forward. Yet, for the past twenty-three years, those governing your state have taken you for a hard and long ride by selling you short. They have not done the things they should have and could have done for you.

“The infrastructure in the state was better 30 years ago than it is now. The state has recorded historic debts run up by the incumbent yet the infrastructure and other things still remain lacking because of under-investment and neglect.

“The money is much but it does not have legs. Where did it go? Not to your welfare. Perhaps, it has found a home with a certain presidential candidate who loves Dubai more than Nigeria.

“But Delta State is not an ATM for migratory politicians. It is a place where good and hardworking people reside and work to create decent and peaceful lives for themselves and their families.”

On his plans for Delta State, which he described as another home to him, Tinubu promised to re-activate the gas revolution industrial park while also seeing to the cleaning of the whole Niger-Delta region to ensure that the host communities do not suffer for building the nation’s economy through their oil.

“Out government will further re-activate the Multi-Billion Dollar Gas Revolution Industrial Park Project. President Buhari’s administration has made great strides in revisiting this project. We will complete it.

“Gas will become a national priority. I envision fertilizer and petrochemical plants, aluminum smelters, and methanol plants, all creating jobs for the unemployed while producing goods that bolster farming, construction and other industries.

“The NDDC will be improved. Greater cooperation with Communities that have suffered environmental degradation will be my policy.

“I am saddened by the environmental cost that the oil and gas industry has exacted. Our moral and economic duty calls us to clean the Niger Delta and to create new opportunities for young Deltans to build better lives for themselves,” he added.

On infrastructure development in the state, which he affirmed had been in a sorry state, Tinubu said, “We will help develop the infrastructure of your state. The deep sea port project and the Omadino – Escravos Road project will be revisited. We will rehabilitate Warri, Koko, Sapele and Burutu ports, creating yet more jobs in the State.”

He also promised to make the state safe for all, noting that no business can thrive in an unsafe environment.

“My government will deploy new technologies to protect the safety and security of law- abiding Deltans as well as the critical national infrastructure situated in this state. We will also introduce greater funding and reform policies to bring the Nigerian police closer to the communities they serve,” he added.

Addressing the rally, APC Governorship candidate in the state, Senator Omo-Agege said the Governor of Delta State and Vice Presidential Candidate of the opposition PDP, Dr. Ifeanyi Okowa, had failed the state and should step down.

He said Delta under Okoya’s watch had become poverty and slum capital of the country and urged the people of the state to vote for Tinubu and all APC candidates in the 2023 general elections.

Okowa also came under criticism from former governor of Edo State, Comrade Oshiomhole who accused him of under-developing the state.

Speaking in pidgin English, he said he was backing Asíwájú Tinubu for the presidency because “anyone wey want higher responsibility, you look hin past record service” stating that Tinubu as governor of Lagos State turned the state around and made it one of the biggest economies in Africa.

Senate President Lawan paid glowing tributes to both Asíwájú Tinubu and Senator Omo-Agege, his deputy, who he described as an eminent son of Delta State.

Senator Oluremi Tinubu, a daughter of the soil addressed the people in her Itsekiri language, urging them to vote for APC so they could have one of their own in the corridor of power. 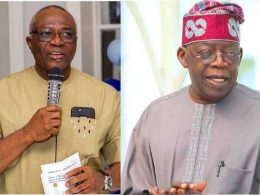 My attention has been drawn to some lies being circulated about me as having jumped the Bola Ahmed Tinubu train and being against his presidential ambition.
byLateef Idris
10 shares
10
0
0
No comments 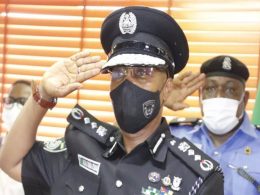 Four policemen and one Civil Defence Personnel have been killed, leaving one other critically injured by armed Bandits in Zamfara state.
byLateef Idris
No comments

A rebel group announced its excision from the ruling All Progressives Congress (APC), on Wednesday, calling itself Reformed…
byTayo Aderinola
No comments