The Executive Chairman of Oriade Local Council Development Area, Hon Ramotalai Akinlola-Hassan has assured residents of the council that their needs will be included in the 2023 budget proposal.

The Executive Chairman of Oriade Local Council Development Area, Hon Ramotalai Akinlola-Hassan has assured residents of the council that their needs will be included in the 2023 budget proposal.

The Council Chairman gave the assurance on Thursday, at the council secretariat, while delivering her keynote address, during the conduct of the year 2023 Budget Stakeholders Consultative Forum.

In her words,” the purpose of this annual exercise is to give the citizens of Oriade LCDA, the opportunity to be part of the preparation and planning process of 2023 budget proposal”,

Hon Akinlola-Hassan appealed to all tax-paying residents in Oriade LCDA to ensure prompt payment of their rates and levies.

The council chairman highlighted some of the achievements of her administration in the last one year, and assured them of more dividend of democracy in 2023.

She disclosed that two roads have been identified by her administration,for rehabilitation and that construction work will commence soon on them.

The roads, according Hon Akinlola-Hassan,are; Ade Oshodi road,in Ijegun-Egba, and Shuaib street in Masa Masa area of the council.

Majority of residents who attended the forum, commended the chairman for the modest achievements recorded by her administration in the last one year, and appealed to her to continue in the direction in 2023.

Among stakeholders who attended the event, were the Vice Chairman of the council, Alhaji (Chief) Moshood Badmus,Leader of the council’s Legislative Arm, Councillor Jamiu Jimoh Shittu and other elected councillors, members of the council’s Executive Committee, including the secretary to the council,Mr Rasak Olojede. Others were, chairman of All Progressives Congress (APC) at the council,Alhaji Hassan Sabitu, secretary of the party, Rasheed Jimoh,leaders of APC in Oriade LCDA, Alhaji Isiak Ajakaiye and elder Ebijimi, community and religious leaders,market men and women,led by the Iyaloja General of Oriade, Alhaja Tawakalitu Muse Balogun, Artisans, Management Team,led by the Council Manager,Prince Akitoye Babatunde and other members of staff. 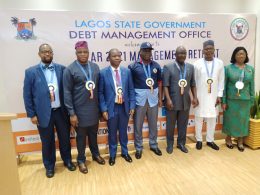 Lagos State Government has disclosed that the automation of its Debt Management Office has further assisted the Agency's financial transaction processes to position Lagos ahead of other States in the country.
byTayo Aderinola
No comments

Alarmed at the rate of encroachment on the Federal Highway alignment, abutting CMD Road Magodo, the Ministry of…
byLateef Idris
No comments