2019: Babangida’s aide Kassim Afegbua maintains innocence; to turn self in

byTayo Aderinola
3 minute read
Total
0
Shares
0
0
0
Kassim Afegbua, the media adviser to ex-Nigerian leader Ibrahim Babangida, who was declared wanted by the police has absolved himself of any wrongdoing.

But the spokesperson said he would turn himself in to the authorities by Wednesday and was prepared to fight his ordeal in courts.

Mr. Afegbua released the Sunday statement which Mr. Babangida, a former head of state, used to complain about President Muhammadu Buhari’s shortcomings and advised Nigerians on the path to the future.

Hours after the statement was released, a counter press release emerged that purportedly had Mr. Babangida’s approval.

The development immediately threw the public into confusion, and reports surfaced Sunday night that police were looking for Mr. Afegbua.

The hint that police would arrest Mr. Afegbua first came from the presidency, according to media reports.

Mr. Afegbua had on Monday afternoon told PREMIUM TIMES he didn’t receive any invitation from the police after reports emerged Sunday night that he was wanted.

He also wondered when the presidency became a mouthpiece of the police.

Mr. Babangida told THISDAY newspaper that he had no complaints about Mr. Afegbua because the statement he circulated was authorised by him.

“He is therefore declared wanted by the NPF and should report at the nearest police station,” Mr. Moshood, a chief superintendent of police, said Monday night.

Mr. Afegbua told PREMIUM TIMES after he was declared wanted that his lawyers were studying the pronouncement. And shortly after midnight, a statement from his lawyers was sent to PREMIUM TIMES absolving the journalist and long-time spokesperson of Mr. Babangida of any wrongdoing.

Mr. Afegbua “is a well-known journalist and was a cabinet member of Edo State Government with a known address in Benin, Edo State and Abuja, yet he is not on notice of the police invitation whatsoever, before the purported publication declaring him wanted,” according to the statement which came from Kayode Ajulo & Co. in Abuja.

“For the avoidance of doubt, there are spelt-out procedures for declaring a person wanted by the police. The police or other law enforcement agencies can declare a person wanted if they find reasons to do so, particularly if the person is a suspect in the commission of a crime and is on the run.

“The public must know that our client, in discharging his duty to his principal, General Ibrahim Babangida, GCFR cannot by any stretch of the imagination be said to have committed a crime that warrants such negative publicity. Neither is he on the run.

“Our client, however, remains undeterred by the desperate efforts of some individuals to intimidate him and bend his will and rights against the Constitution provisions, framework of Nigeria Police Force Act and the laws of the land.

“The circumscription of his constitutional right to the dignity of self, freedom of expression and fair hearing denotes that there is a desperate attempt to scare him into submission,” the statement said.

Mr. Afegbua would turn himself in when he returns from a trip by Wednesday, his lawyers said. 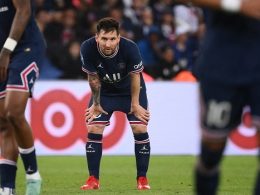 Injured Messi Ruled Out Of Midweek Action With PSG

Lionel Messi will miss Paris Saint-Germain’s game away to Metz on Wednesday due to a knee injury which coach Mauricio Pochettino has said was the real reason behind his surprise decision to take the six-time Ballon d’Or winner off against Lyon at the weekend.
byLateef Idris
No comments

Sanwo-Olu replies Ambode: You’re a liar, I wasn’t arrested in US or treated for ailment

The Chartered Institute of Bankers of Nigeria (CIBN), on Tuesday, called on the Lagos State Government to repair…
byTayo Aderinola
No comments