Odita told newsmen that such collaboration would make the event a platform providing greater opportunities for as many Nigerians as possible.

According to her, such synergy and collaboration will also provide opportunities to reach outside Lagos to all states of the federation.

“We need corporate organisations to get behind this project and add value. We also need to create synergy between organisations to support for it to continue to be open and free to the public,” she said.

The co-founder said that more people would be aligned and the internet penetration would increase with such opportunities.

Odita said that addition platforms such as twitter had come on board since inception of this year’s event.

She said the collaboration with corporations and government would create more impact as more people continued to appreciate the power of social media.

The 2018 Social Media Week, currently in its 6th edition with the theme ‘Closer’, would end in Lagos on Friday.

The event covers variety topics, including the Future of Media, Travel and Tourism, Governance, Gender, Entertainment, as well as, Emerging ideas and trends across the globe.

A flood of tributes poured Friday night as the news of the death of Nigeria’s Second Republic President,…
byTayo Aderinola
No comments

The Management of the Chinese construction giants, CCECC, has said that it is always willing to support Nigeria…
byTayo Aderinola
No comments 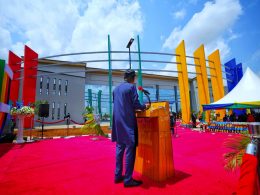