No fewer than 1.6 million Nigerians out of the 1.9 million living with the Human Immuno-deficiency Virus are on treatment. Director-General, National Agency for the Control of AIDS (NACA), Dr. Gambo Gumel Aliyu, disclosed this to The Guardian in an interview ahead of World AIDS Day (WAD) 2021, today.

No fewer than 1.6 million Nigerians out of the 1.9 million living with the Human Immuno-deficiency Virus are on treatment. Director-General, National Agency for the Control of AIDS (NACA), Dr. Gambo Gumel Aliyu, disclosed this to The Guardian in an interview ahead of World AIDS Day (WAD) 2021, today.

Aliyu also said the country is close to meeting the 90-90-90 target and ending Acquired Immune Deficiency Syndrome (AIDS) by 2030. 90–90–90 is an ambitious treatment target by the Joint United Nations Programme on HIV/AIDS (UNAIDS) to help end the AIDS epidemic.

Aliyu said: “Our estimate shows that between 1.8 to 1.9 million Nigerians are currently living with HIV/AIDS. Of this number, 1.6 million are already on treatment. So, we have 300,000 more to go.”

The theme of WAD 2021 is ‘End inequalities. End AIDS.’ With a special focus on reaching people left behind, the World Health Organisation (WHO) and its partners are highlighting the growing inequalities in access to essential HIV services.

WHO is calling on global leaders and citizens to rally around and confront the inequalities that drive AIDS and to reach people who are currently not receiving essential HIV services.

This year marks 40 years since the first cases of AIDS were reported. Since that time, where investments have met ambition, there has been huge progress, particularly in expanding access to treatment. By June 2021, 28.2 million people have had access to HIV treatment, up from 7.8 million in 2010, although progress has slowed considerably.

MEANWHILE, the joint United Nations programme on HIV/AIDS (UNAIDS), yesterday, issued a stark warning that if leaders fail to tackle inequalities, the world could face 7.7 million AIDS-related deaths over the next 10 years. It noted that HIV infection rates are not slowing fast enough to reach the goal of eradicating AIDS by 2030.

UNAIDS further warned that if the transformative measures needed to end AIDS are not taken, the world will also stay trapped in the COVID-19 crisis and remain dangerously unprepared for the pandemics to come. According to the agency, shortcomings in the pandemic response can also be seen in the fight against the decades-old disease.

According to the most recent UNAIDS statistics, 38 million people are living with HIV/AIDS worldwide, and in 2020 alone, 1.5 million people became newly infected with HIV.

Infections are also following lines of inequality. Six in seven new HIV infections among adolescents in sub-Saharan Africa are occurring. Gay men and other men who have sex with men, sex workers and people who use drugs face a 25–35 times greater risk of acquiring HIV worldwide.

“Many of these missing pieces to fight HIV are also allowing the COVID-19 pandemic to continue and leaving us dangerously unprepared for pandemics of the future,” said UNAIDS Executive Director, Winnie Byanyima.

In June, UNAIDS set new targets to reach by 2025: bringing HIV services to 95 per cent of those who need them; reducing annual HIV infections to fewer than 370,000; and reducing AIDS-related deaths to fewer than 250,000 by 2025. But the report said the world is off-track to meet those goals.

“UNAIDS data show that the curves of HIV infections and AIDS-related deaths are not bending fast enough to end the pandemic,” it said.

The report highlighted five urgent Global AIDS Strategy priorities it said should be funded and implemented globally “for pandemic prevention, preparedness and response.” They include access to preventative equipment like condoms and clean needles, as well as support for community-based health services.

A new analysis suggests countries may be under-reporting the size of at-risk populations and highlights the need for better data, it said.

UNAIDS said the disease could kill 7.7 million people between 2021 and 2030 if the availability of preventative measures and treatments remain at 2019 levels.

If, however, the international strategy is put in place and 2025 goals are met, UNAIDS said some 4.6 million lives could be saved over the course of the decade.

UN Secretary-General, António Guterres, in his World AIDS Day message, said: “It is still possible to end the epidemic by 2030. But that will require stepped-up action and greater solidarity. To beat AIDS—and build resilience against the pandemics of tomorrow—we need collective action.

“Division, disparity and disregard for human rights are among the failures that allowed HIV to become and remain a global health crisis. Now, COVID-19 is exacerbating inequities and disruptions to services, making the lives of many people living with HIV more challenging.”

TO commemorate WAD 2021, remember all who have lost their lives to AIDS-related illnesses and honour those who carry on the fight, AIDS Healthcare Foundation (AHF) will hold a series of events with the motto ‘AIDS: The Other Pandemic,’ as a reminder that even during the COVID-19 crisis, the world must protect the fragile gains made fighting HIV/AIDS.

A recent report by the Global Fund shows the pandemic significantly impacted health systems and service delivery in low- and middle-income countries in Africa and Asia last year. As a result, HIV service delivery has been disrupted in nearly two-thirds of countries. Additionally, HIV testing fell 41 per cent from April to September 2020, compared to the same period in 2019.

Despite many challenges, AHF says COVID-19 must not be used as a pretext to permanently scale back the global response to AIDS. “With the devastation, COVID-19 has brought upon the world, it’s understandably stayed at the forefront for the past nearly two years – which is why World AIDS Day is so critical for remembering ‘The Other Pandemic,’” said Terri Ford, AHF Chief of Global Advocacy and Policy.

“HIV/AIDS is still responsible for nearly 700,000 deaths worldwide each year. While world leaders must battle COVID-19, including committing to real action on global vaccine access, they must also keep the promise on AIDS by ensuring HIV testing and lifesaving treatment reaches everyone who needs it.

“AHF will host diverse commemorative live and virtual events in most of its 45 countries. The events seek to refocus the world on the AIDS pandemic and the people living with or affected by HIV globally and to serve as reminders of the importance of access to HIV testing, prevention, and treatment. Advocates everywhere are encouraged to join us as the world continues battling to end one of the deadliest infectious diseases in history, accounting for more than 36 million deaths globally since the start of ‘the other pandemic.”

In Nigeria, AHF Nigeria will host two youths themed events, one at the Wuse Market in Abuja, spearheaded by adolescents, especially AHF Abuja Girls Act Chapter and other youth groups in a fun-filled outreach to draw the attention of young people to the challenges of HIV while impacting the needed knowledge they need to prevent themselves from the infection and to show the gains of staying on treatment for those who are positive.

Also at the Nasarawa State University, Keffi, in collaboration with the institution’s Red Cross, AHF shall be mounting a testing drive for the youthful population and providing awareness and education for the school population.

Across AHF other states of Benue, Kogi, Anambra, Cross River and Akwa Ibom, teams are actively involved in testing campaigns and media drive through radio programming to ensure that the maximum number of people are reached through live interviews and jingles cut in different indigenous languages to drive people to test and get on treatment.

“While we’ve made great progress fighting HIV/AIDS worldwide, COVID-19 is threatening to erase those precious gains by disrupting the world’s ability to continue responding to HIV, particularly in our most vulnerable populations,” said Dr. Penninah Iutung, AHF’s Africa Bureau Chief.

“COVID-19 has also shown the glaring need for the world to prioritize solidarity and collaboration on vaccine access – and not charity from wealthy countries – as the way to end this crisis and lay the groundwork to protect against future ones. It’s time that world leaders acknowledge we’re an interconnected world and act accordingly by ensuring those most in need, whether for HIV or COVID-19, get the resources they need to lead healthy, productive lives.”

“The recalibration of the HIV epidemic showed a significant decline in HIV prevalence from 5.8 per cent in 2001 to 1.3 per cent in 2018. Presently, it is estimated that 1.8 million people living with HIV in Nigeria of which 90 per cent are aware of their HIV status, 96 per cent are on treatment and 84 per cent are virally suppressed. Despite the negative impact of the lockdown instituted as a public health measure to curb the spread of COVID-19 across the world, the HIV programme in Nigeria proved resilient with an increase in the number of people placed on treatment.”

“Also, the prevention of mother to child transmission has also been a challenge. One of the three top things that must be achieved for HIV control to be complete includes stopping mother to child transmission.”
THE Federal Government has given a marching order to NACA to push for the last mile in the fight against HIV/AIDS in the country. While lamenting that the rate of new infections among young people and babies born to HIV positive women remains a major concern in sub-Saharan Africa, especially in Nigeria, the Secretary to the Government of the Federation (SGF), Boss Mustapha, yesterday, stressed that no child in the world should be born HIV positive.

“This is the commitment we owe the next generation in ensuring an AIDS-free generation. Our collective effort has brought us thus far, where HIV is now a chronic medical condition rather than a deadly disease. Many people living with the virus are expected to lead a healthy normal life while on antiretroviral.”

Aliyu reiterated the need for the contribution and cooperation of everyone in the country to control HIV. “And one thing that people could do to contribute is starting with themselves; knowing your HIV status today. If you do not know before, know it today. If you are positive, find out where we provide services and access the services to keep that virus in you without letting it go to affect the other person. And if you are found HIV positive, control the virus in you, do not let it go out and do not let it kill you,” he said. 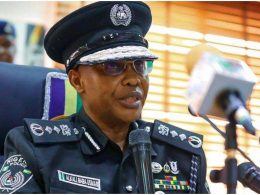 ‘We have no plans to raid Lagos’ – Police debunk rumour