Why APC opted for direct primary, by Oshiomhole

The All Progressives Congress (APC) adopted the direct primary for the selection of its candidates for next year’ elections to boost internal democracy, National Chairman Adams Oshiomhole said yesterday.

He told The Nation that  the party decided to “liberalise” its shadow polls by making all registered members automatic delegates.

He said the option will reduce the corruption and manipulation associated with the delegates system, which always generates huge post-primary crises.

Oshiomhole, however, acknowledged the challenges associated with the direct system, including logistic and security problems, saying they are surmountable.

Defending the direct system, he said: “Party members are complaining that they have no role to play in the party, except voting during the general elections, like other members of the public.

According to the chieftain, those opposing the direct primary are mainly governors who were the major beneficiaries of the delegates system, which they maximally exploited to personal advantage.

He noted that while governors are against the system, federal lawmakers are rooting for it.

However, the chairman said while direct primary will be used for the presidential nomination, it can still be reviewed for other layers of shadow elections at the state and federal levels, in consideration of the peculiarities of the state chapters.

Also yesterday, a group claiming to be supporters of President Muhammmadu Buhari staged a rally at the APC National Secretariat in support of direct primary.

The group, which got to the party secretariat at about 1pm, demanded to meet with National Chairman Adams Oshiomhole to submit a petition to him.

They displayed placards with inscriptions, such as: “We support direct primary” and “Power must go back to the people “.

Leader of the group Yusuf Musa Ardo said they came to support direct primary because it would help return power to the people.

Ardo, who was with the group’s chairman Ambassador Hajia Fatimah Goni said: “We are Nigerians and supporters of this party. This is grassroots mobilisation for PMB/Osinbajo and we are not happy with the position of some of the governors and some of the National Working Committee members.

“We are in support of direct primaries; power must go back to the masses. We are tired of corruption and manipulation. They have been manipulating Nigerians and the masses; we cannot continue to support that idea,” he said.

Chief of Staff to the National Chairman Abbas Braimoh who received the group on his behalf, said the leadership of the party was responsive to the yearnings of Nigerians and will do everything possible to satisfy their demands.

“As you know, just like the national chairman has said, politics is a vehicle of development and empowerment and people are the subject and object of that development. So, whatever we do here must be people-centered that is why the new leadership of the party has decided to do whatever is best for the party.

“Like you said, the party has large followers and the special grace of God, we would win the election because this is not only the largest party in Africa, but the most organised party in Africa and with your support I can tell you the new leadership is ready to engage the Nigerians,” he said.

He assured the party supporters that the leadership would do the best under the circumstance.

Dr. Tejuoso, who is seeking reelection in the same constituency with Governor Ibikunle Amosun, who is believed to be keen to return to the senate after his governorship tenure, told reporters that  “Ogun State is known in Nigeria to be the first in most things. It has been established that for democracy to thrive and to catch up with that of the developed nations, direct primary is the answer and since Ogun State is always the first, I am sure my governor will surely support it because he always wants the best for the state.

“I am sure he will lead and others will follow and we are going to do direct primaries by God’s grace in Ogun State and I am sure my governor will agree.

“So that everybody in the party can have their say and choose whoever they want. Anybody who offer themself for election, let the people agree that you are competent enough. So let everybody vote.

“It shouldn’t be a scenario of where few people will just be gathered somewhere and somebody will then tell them what to do. We want a change and that is what our party is preaching.

“Some of us are beneficiaries in the past but that shouldn’t continue.

There must be a change because we can’t leave this for our children.”

He added that he remained in the APC after initially announcing his defection because he was prevailed upon by President Muhammadu Buhari.

He said he had been with President Buhari since their days in the All Nigeria Peoples Party (ANPP), adding that they both lost elections three times before finally winning.

He described the President as a mentor whose integrity nobody can contest.

He said his initial plan to move was because of a mere misunderstanding between him and the party at the local level, which, he said, had been resolved.

“I cannot leave the APC. I will only leave if President Buhari leaves,” Tejuoso said.

In Adamawa State, stakeholders said they had opted for indirect primary.

In a communique at the end of its stakeholders meeting at the Government House, Yola,  signed by the state Publicity Secretary, Mohammed Abdullahi, Adamawa APC said: “The Constitution of the All Progressives Congress (APC) provides for options of Direct, Indirect or Consensus Elections.

“To this end, the State Executive Committee (SEC) of the All Progressives Congress (APC) at its meeting on Monday 3rd September 2018, having consulted widely to consider the best option for the conduct of the party primaries in Adamawa State, resolved to adopt the INDIRECT primaries for the Governorship, National Assembly and State House of Assembly primaries towards the 2019 General Elections.”

Moving the motion for the adoption of indirect primaries; a former political adviser to ex-President Goodluck Jonathan, Mr Ahmed Gulak, said  having listened to all recommendations, Adamawa State “has strongly adopted indirect primaries”.

The motion was seconded by former Adamawa House of Assembly Speaker and one time Acting Governor James Barka.

Speaking before the motion was adopted, State Chairman Ibrahim Bilal, who was represented by his deputy, Samaila Tadawus, said the decision to bring together members of the State Executive Committee (SEC) to deliberate on the matter was in line with Article 12.8 of the party’s constitution and in compliance with directive of National Executive Committee (NEC) of the party to all states to decide on the mode of conducting their primaries.

Citing reasons for the adoption of the motion, House of Assembly Speaker Kabiru Minjinyawa said there should be no interference in the running of the party from Abuja.

He said: “There are more than two million fake membership cards of APC in circulation with fake people claiming to be APC members.”

Senator Binta Masi (Adamawa North) said: “The motion that was moved and seconded at the NEC meeting was that each state should meet with its SEC members on the mode of primaries that will be conducted, direct primaries would have been better but the crisis we have in the Northeastern part of Nigeria and having tried it in the party congress, we saw what came out of it. The most important thing is that we want to have a free and fair election that will metamorphose into election and we surely believe that APC will still stand in control not only in Adamawa State but the entire country”.

Lagos State Governor, Mr. Babajide Sanwo-Olu has implored leaders of Community Development Associations (CDAs) and Community Development Committees (CDCs) to monitor the 377 projects going on in their various wards across the state to ensure that quality is not compromised.
byLateef Idris
No comments 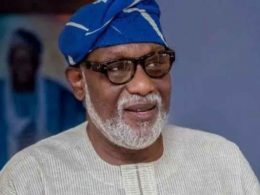 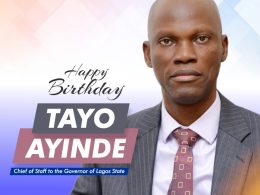 Faleke Congratulates Ayinde On His Birthday

The Ranking federal lawmaker representing Ikeja federal Constituency and Chairman,House Committee on Finance in the House of Representatives Rt Hon (High Chief) James Abiodun Faleke felicitates with Mr Tayo Akinmade Ayinde (Chief of Staff to the Executive Governor of Lagos state) on the joyous occasion of his birthday today 24th of August,2022.
byLateef Idris
No comments 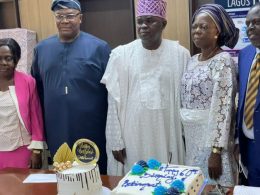