Lagos State Governor, Akinwunmi Ambode, on Thursday condemned in strong term the excessive and persistent self-administration of drugs without regard to medical prescription, saying that his administration was more determined to curb the scourge through relentless advocacy campaigns.

The Governor, while speaking at the official launch and flag-off ceremony of Lagos State Kicks Against Drug Abuse (Laskada) Campaign held at De Blue Roof- LTV Complex,  said that the state government would not rest on its oars until the unhealthy practice becomes a thing of the past.

He added that the state government was using the launch of LASKADA, ‘Lagos Kicks Against Drug Abuse to declare war against drug abuse.

According to him, the LASCADA campaign should be a clarion call and a reminder to every individual, organization and the society at large to safeguard the future of the country.

In his words “As a responsible government, we will not fold our arms and allow this unhealthy practice create a blurry future for our tomorrow. This is what informed the establishment of youth-friendly Centres in all the Local council areas to serve as avenues for relaxation and recreation and to further engage youths in productive venture to reduce the menace of drug abuse.”

He commended the current Africa Female Footballer of the year, Asisat Osoala for partnering with the state government, just as he called on other celebrities, especially those in the entertainment industry to join the LASKADA campaign by making the young ones aware of the danger inherent in drug abuse.

The governor also enjoined parents and guardians to give good parental care to their wards. “As parents, we must be observant of our children’s behavior and be on the look-out for strange attitudes and behavioral changes that may be drug induced.”

The First Lady of the State, Mrs. Bolanle Ambode in her goodwill message said that parents should not leave the responsibility of winning the youths from drugs to government alone.

While advising the youth, the wife of the Governor advised them to know that their future was in their hands. “Though parents and government will do their best, a lot depends on your own personal commitment to living a decent social life, driven by big dreams and aimed at success.”

The Commissioner for Youth and Social Development, Mr. Agboola Dabiri said that the fact that the optimal development of young people was critical in national development agenda and deserved significant attention, necessitated the Lagos State Kicks against Drug Abuse campaign intended to carry out aggressive sensitization on the misuse of drugs by young people in the state.

He commended the State Governor, Mr. Akinwunmi Ambode for investing heavily in the development of youth in the State because of his belief that the dividends from the investment can never be quantified.

Secretary to Government of the Federation (SGF), Mr Boss Mustapha, on Friday inaugurated a fact-finding committee on National…
byTayo Aderinola
No comments 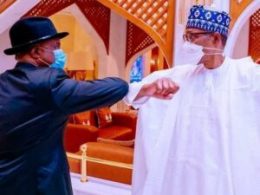 There Won’t Be Emergency Rule in Anambra, Buhari Assures Obiano

Those expecting that a state of emergency would be declared in Anambra State can now perish the thought. And the electorate and contestants in the 6 November governorship election can now heave a sigh of relief like a train that just arrived on its platform after a long tortuous trip. Reason: President Muhammadu Buhari has assured Governor Willy Obiano of Anambra, who visited him in Abuja that the threat of emergency rule by Attorney General Abubakar Malami holds no water.
byLateef Idris
3 shares
3
0
0
No comments