The Federal Road Safety Corps, (FRSC), Lagos State Command on Thursday, assured residents of the state of free flow of traffic, in spite the temporary closure of the third mainland bridge.

Mr. Hyginus Omeje, the Sector Commander of FRSC in the state gave the assurance.

He said 200 personnel had been deployed to the critical corridors to facilitate the free flow of movement of vehicles.

Omeje said that the corps was working in synergy with other law enforcement agencies to check gridlock on the road as a result of the ongoing repairs on the bridge.

“We have about 200 FRSC personnel joined with LASTMA, Nigerian Security and Civil Defence Corps (NSCDC) and the police.

“All efforts have been put in place to make sure there is a free flow of traffic at various alternative routes for motorists.

“The traffic officers have mapped out strategic and alternative routes where the personnel will be positioned to direct the motorists accordingly and ensure their compliance to the traffic rules,” he said.

The FRSC chief said that motorists coming from Lagos-Ibadan can use alternative routes to connect Ikorodu-Funso Williams, Western Avenue to Eko Bridge.

“Other alternatives are from Tollgate to Alapare-Ogudu, Iyana Oworo to Gbagada-to Anthony then down to Ikorodu road.

“The rest are from Oshodi-Apapa expressway to Orile to Eko bridge or Ijora Olopa.”

According to him, moving out of Lagos Island, motorists can make their way to Adeniji Carter Bridge, Idumagbo down to Oyingbo, then to Herbert Macaulay to Ijora Olopa to Eko bridge.

Omeje advised motorists to make use of Bus Rapid Transit (BRT) and waterways if they find it not necessary using their personal vehicles.

“If you don’t have anything doing on Island for those four days, you can stay away to avoid gridlocks or make use of BRT and waterways.

“At least, that is even much faster and less stress pressure from Ikorodu to CMS.“

Contributing, Mr Chris Olakpe, the Chief Executive Officer, LASTMA also said that about 150 LASTMA officials had been drafted to ensure free movement of vehicles during the closure of the bridge.

Olakpe said that the personnel were stationed at various critical routes to monitor the movement of the vehicles and give directions to them.

“LASTMA is on top of the game and we are joining forces with other law enforcement agencies to handle the traffic, especially at the Eko Bridge.

“My advice to the motorists is that they should adhere to instructions from the officials and drive safely to ensure sanity on the road during the closure of the bridge.(NAN)

It said the development would allow for investigative maintenance test to be carried out before embarking on proper repairs.

The Federal Government had in July announced plans to shut the bridge but shelved the closure after consulting with the Lagos State Government and other relevant stakeholders. 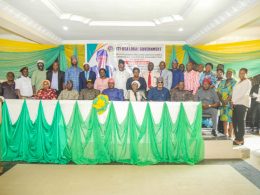 The National Agency for Food, Drug Administration and Control (NAFDAC) has placed a ban on the sale of…
byTayo Aderinola
No comments

The Lagos State Signage and Advertisement Agency (LASAA) has commenced the first phase of an awareness campaign to sensitise members of the public on the need for compliance with regulations guiding outdoor advertisement in the state.
byLateef Idris
No comments

The Lagos governorship candidate of the All Progressive Congress (APC), Babajide Sanwo-Olu has called out his main opposition,…
byTayo Aderinola
No comments