The Lagos State Task Force Chairman, CSP Yinka Egbeyemi, has ordered immediate released of vehicles impounded at the agency’s traffic yard in Ikorodu axis of the state, on learning of alleged touting, reported by members of public, against the unit.

Egbeyemi, who visited the place on Tuesday, freed the vehicles to their owners, despite various traffic offenses committed, including driving against traffic, driving on BRT lane, obstructions among others, after pleaded for mercy and admitting their wrong doings.

As gathered, no fewer than seven vehicles were released to their owners, with possibility that the agency may free more, since the others were informed to report at the unit office for identifications and other processes.

Speaking on the development after his action, the taskforce boss stated that his decision to free the vehicles was to prove that the Lagos state government was in place to create hardship in the state but that it would also not tolerate lawlessness from members of public.

He explained that the action was also to inform Lagosians that the state government does not encourage touting or bribery and that the agency would take action against any of its agency’s officer found guilty of such crime.

Egbeyemi reiterated his commitment of ensuring adequate discipline among his men even as he disclosed that any taskforce member caught collecting bribe or extortion from members of the public will face the wrath of law.

According to him, they would continue to have zero tolerance for driving against traffic to make recalcitrant motorists to be law-abiding.

“It is not true that we are anti-masses. We fight those people that are adamant and defiant. We are not in a state of anarchy, we are in an orderly society where there must be law and order. We take offenders to court, and once anyone is pronounced guilty, such ends in prison.

“How can a sane driver be driving against another vehicle coming with speed; this is how innocent people are killed,’’ the chairman said.

He urged charged members of the taskforce to desist from any act that can dent the image of the unit, pointed out that it would be difficult to enforce law once they engage in corrupt act.

According to him, the Commissioner of Police, Imohimi Edgal had declared zero tolerance to corruption and declared that corruption would not have a place in his tenure as police boss in the state.

“Am appealing to Lagosians to abide with the rules and regulations that guide road use. Be a good citizen and don’t offer members of the task force bribe and in case any of them demand please kindly report.

Egbeyemi said the unit understood the plights of the masses, but that laws must be respected so as to make the state livable for people.

“These are things we do but people don’t understand. It is my duty to raid when people are doing illegality.”

One of the freed vehicles’ owners, who spoke to the Guild before leaving the premises, cast blames of his wrong on passengers, though vowed not to succumb to pressure in the future.

Besides, one Segun Olusoga, a private taxi driver, claimed that a passenger he had in his vehicle pleaded with him to manoeuvre traffic that she was late for appointment.

“I drive a Toyota Corolla with a plate number AGL136BH, in the process of trying to satisfy my client, i manoeuvre traffic and was cut but to my surprise the passage eventually left me with my problem.”

Another one said that when there was traffic he attempted to boycott traffic by passing through BRT lane and was cut, “The traffic around Mile 12 is usually much due to bad road around Ketu, so I was trying to see how I can fasten my journey before i was cut. I admitted to the fact that what i did is not good. I won’t do it again. Thanks.

The case Akinpelu Atanda with plate number KSF10FB was similar as he admitted to wrong doing as he pledge not to repeat it again, “I don’t know why i was in hurry, now that i was arrested where am rushing to, I can’t go again.”

Nigeria has received nearly four million doses of the COVID-19 vaccine, shipped via the COVAX Facility, a partnership between CEPI, Gavi, UNICEF and WHO.
byTayo Aderinola
No comments

LASIEC to launch new website ahead of Lagos council poll

The Lagos State Independent Electoral Commission (LASIEC) says it will soon launch a user friendly website in readiness for the forthcoming local council election in the state.
byTayo Aderinola
No comments 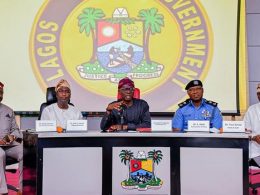 Against the backdrop of growing menace and nuisance constituted by commercial motorcycles, popularly known as Okada, Lagos State Government has imposed a fresh ban to curtail the unruly activities of the riders.
byLateef Idris
1 share
1
0
0
No comments