Reports say that the leadership of the Senate and governors from South East are to meet President Muhammadu Buhari on ways to resolve the crises emanating from the series of ethnic agitations.

The senators’ resolve to meet with the executive was reached on Tuesday at its resumption after eight-week recess.

The meeting is to cement the agreement by South East and northern senators on their position on agitation for Biafra.

Senate President Bukola Saraki read out the summary of the outcome of the meeting, stating that “At about 12.30 pm, we concluded our closed-door session.

“We deliberated on key national issues and resolved as follows that the unity of the Federal Republic of Nigeria is non-negotiable.

“We also resolved to seek all lawful avenues to ensure that peace is restored to all parts of Nigeria.

“All groups or associations currently in agitations for one reason or the other should do so through the laws of the land.”

Also governors of the five states in the South East will soon meet with President Muhammadu Buhari, on Biafra agitations in the region.

Chairman of the South East Governors’ Forum and Governor of Ebonyi State, Chief David Umahi, disclosed this during the 2017 Ebonyi Peace Day celebration at Ezillo, in Ishielu Local Government Area of the state,

“I was able to hold a private discussion with our dear president. We have discussed all issues of agitations and Mr. President is going to further the discussions with South East governors.

“And, I want to assure our people that all our concerns will be addressed, under peace, with our President. And Mr. President sends his regards to Igbo people.”

Umahi added that he was shocked by the President’s humility when he listened attentively and gave him a dose of humour during the discussion, in New York.

“I said ‘sir, you have a very good heart.’ This was because, in the course of our discussion, he said something. He said it doesn’t matter what people say about you; that what matters is God that sent you. And when God sends you, you should do justice to all and leave the rest to God.

“So, it doesn’t matter how we feel. What matters is that we must use dialogue, peaceful approach, prayers, commitment and love, to get to where we want to be. And, before now, we were noted for hard work. We must go back to it. We must go back to loving ourselves,” Umahi said.

At another forum, Umahi said he would, next week, lead his colleagues in the South-East and other stakeholders in Igboland, to the 2017 National Conference of the Igbo Christian Restoration Assembly (ICRA). 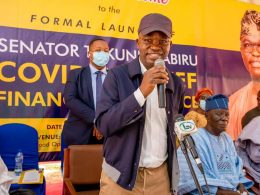 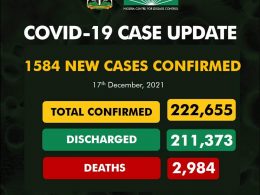 On the 17th of December 2021, 1584 new confirmed cases and 1 death were recorded in Nigeria
byTayo Aderinola
No comments

Hate speech bill: Nobody fronting for me at NASS – Lai Mohammed

The Minister of Information and Culture, Alhaji Lai Mohammed has denied the allegation that he is behind the…
byTayo Aderinola
29 shares
29
0
0
No comments

The Lagos State Commissioner for Health, Prof. Akin Abayomi, on Sunday said that the state tested a total…
byTayo Aderinola
13 shares
13
0
0
No comments