To voters in Ojodu Local Council Development Authority, it is no surprise that of all the candidates now jostling for the chairmanship position in the forthcoming elections, one name stands out clearly. That name belongs to the incumbent head of the LCDA, Hon. Olumuyiwa Julius Oloro, an astute and down-to-earth politician who, in the three short years he helmed the council, has left his indelible mark in different areas of development.

Otherwise how do you explain the numerous awards he has garnered in his first tenure as chairman? Consider his records and awards: Best local government chairman conference 57 award in 2012; Grassroots Achiever’s Award in the same year; Award for Outstanding Contribution on Security of Life and Property by the Police Community Committee Area F Police Command in 2012 and Special Merit Award for Selfless Service, not to mention his chieftaincy title from a major religious centre in his community.

It is not for nothing that Hon. Oloro has been so decorated. Why? Because he has a formidable pedigree as a politician who rose through the ranks to become what he is today. In his view, he has more to offer his community. Way, way back, long before some of his co-contestants now ever cut their political teeth, Oloro had embarked on his political odyssey, a journey that saw him as a councilor in Ward G of Ikeja Local Government in 1997. And then, chairman for elected Councillors in Lagos State only to be appointed a member of Finance and General Purpose Committee. He was a delegate representing Ward J 12, Committee for formulation of policies and to enhance implementation, and LGA delegate under Alliance for Democracy (AD).

Now a staunch member of the Action Congress of Nigeria, the ruling party, Oloro was born on November 20, `1964 and happily married with children. He began his primary education at Ebenezer Primary School, Akoniloge, Ikere Ekiti between 1970 and 1976 to obtain a First School Leaving Certificate and then completed his secondary school education at African Church Comprehensive High School, Ikere Ekiti in 1982 and Eleyo High School, Ikere Ekiti in 1983. Next, he got his O.N.D and H.N.D in Engineering from Federal Polytechnic, Idah, Benue State and Federal Polytechnic, Ilaro, Ogun State between 1985 and 1987, 1988 and 1990, respectively.

Considering his educational qualifications and political experience, there is no doubt that Oloro is eminently qualified to head Ojodu LCDA for another four years.

The Coalition of Northern Groups, which asked the Igbos to leave the North by October 1,  has withdrawn…
byTayo Aderinola
No comments 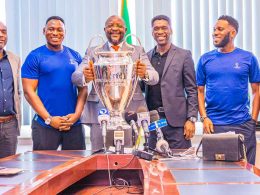