A polling agent of the Peoples Democratic Party in the ongoing governorship rerun election in Osun State was missing on duty on Thursday.

The agent did not report at the Ward 7, Unit 12 Polling Unit in Adereti village, Ife South Local Government Area.

An official of the Independent National Electoral Commission(INEC), Stephen Oyewande, said he could not explain why the PDP agent was not on duty at the polling unit.

Oyewande, INEC’s Deputy Director, Voters Education, told newsmen to direct their enquiries on the missing party agent to the PDP.

“ Call the state chairman of the party and ask him why his party agent is not here. I can’t explain why he is not here,’’ he said.

Present, however, were Lateef Abimbola of All Progressives Congress, Olaiya Yemi of All Peoples Alliance and Rasheed Mojeed of Advance Congress of Democrats.

There was tight security at the polling unit while voters were prevented from bringing their smartphones into the cubicles.

Scores of commuters, especially those moving toward the Ondo end of the highway were caught in the traffic snarl due to the roadblock mounted by the police.

The Nigerian Air Force (NAF) and other sister services have agreed to henceforth subordinate themselves to the Defence Headquarters (DHQ), under the leadership of the Chief of Defence Staff (CDS), Gen. Lucky Irabor.
byTayo Aderinola
No comments 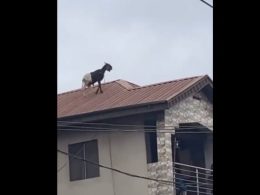 A video has surfaced about a ram that escaped to the rooftop of a three storey-building in Lagos when muslims are marking the Eid-el-Kabir.
byLateef Idris
No comments

Mr Babajide Sanwo-olu, the candidate of the All Progressives Congress (APC) in Lagos State has emerged winner of…
byTayo Aderinola
No comments