Omisore not in SDP, says secretary

The Social Democratic Party (SDP) in Osun State, said it was not aware Senator Iyiola Omisore has joined the party.

State Secretary of the party, Elder Femi Awe, told DAILY POST  that the party has no record of Senator Omisore as a card carrying member.

“Well, in his usual style and way of doing things, he has been announcing to whoever cares to listen that he has joined our party.

“In actual fact, Omisore has not personally or officially met the party leadership to express his interest of becoming a member.

“We have a laid down procedure and rules in which an intending member must follow, which he has not done, not to talk of submitting letter of intent to contest on our platform”, Awe said.

Omisore, a former deputy governor of Osun state formally announced his switch to the SDP from the Peoples Democratic Party on Sunday.

” Our quest for an alternative political platform is basically in pursuit of a credible political structure that would guarantee that our people enjoy the benefits of accountable leadership at the state level from now.

” Notwithstanding my enormous contributions over the past years or so to building the PDP, after very deep thought and the widest consultations with my God, my family, my supporters in and outside Osun state,

” It is with great concern that I have made a very expedient decision today, to withdraw my membership from the Peoples Democratic Party (PDP) and join the Social Democratic Party (SDP); a party that believed in a balanced, equitable and truly functional Nigeria.

“On the platform of the SDP, I shall with the support of my supporters, followers, and the electorate of the state, seek the nomination to contest for, and by His grace, be elected as the Executive Governor of Osun state on September 22, 2018”.

Meanwhile, a leading governorship aspirant  of the SDP in the state, Chief Yemisi Oladeji has promised to give Omisore a tough fight for the governorship ticket of the party.

Oladeji, in a statement sent to DAILY POST on Sunday said the former Deputy Governor is not more than a “friend of SDP” in the state.

“This is just a wishful thinking brought about by certain elements trying to create confusion in the peaceful process of our party’s primaries. From records available to us, Senator Omisore is not a member of SDP in Osun.

“I advise Chief Omisore to first and foremost, properly approach the party to regularise his membership, and until that is done, he is not a member of our party.

“I would like to sound a note of warning to Omisore that if he felt the primary process in PDP is rigorous, he should wait and see a far more challenging one in SDP. If he opts for the membership of SDP and presents himself as a governorship candidate.

“I want to assure him that I will give him a good and competitive run, putting in all that it will legitimately require to clinch my party’s ticket for the poll.

“Also, we need to drum it loud and clear to the ears of Omisore’s supporters that they should not think we will fall for their delusional belief that Omisore has what it takes to win the governorship poll on any platform.

“We need to remind them that even on PDP platform, Omisore lost miserably to Aregbesola in 2014, even in spite of the backing of the federal government and all its security apparatuses. All those factors that guarantee electoral victory are no longer within the beck and call of Otunba Omisore.

“On behalf of other aspirants on the platform of SDP, we demand free and transparent primary. Since we may end up having another aspirant bringing into the fold baggage of corruption cases, damaged reputation and questionable personality, I have resolved to give all that it legitimately takes to win SDP governorship ticket and fly our party’s flag in the September 22, 2018 poll.” 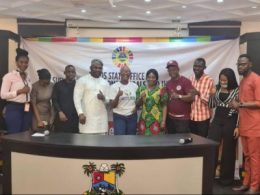 The Lagos State Government has restated its commitment to continuously promote structures that will advance the attainment of Quality Education and Gender Equality (Goals 4 and 5 of SDGs).
byLateef Idris
1 share
1
0
0
No comments

Southwest MSMEs yet to benefit from N50b Covid-19 bailout funds

SOUTHWEST stakeholders operating micro, small and medium enterprises (MSMEs) have expressed outrage over their inability to access the…
byTayo Aderinola
19 shares
19
0
0
No comments The funeral of Brazil legend, Edson Arantes do Nascimento ‘Pele’ will be held today (Monday) at the home of his former club, Santos, after the World Cup winner died at the age of 82, with President Jair Bolsonaro declaring three days of mourning after the news.
byTayo Aderinola
No comments