Mr Adams Oshiomhole, National Chairman of the All Progressives (APC) has reiterated his appeal to aggrieved members of the party to be patient with his leadership, in an apparent response to the emergence on Wednesday of a rebel group, Reformed APC(R-APC)

“My appeal to all those who are aggrieved is to be patient,” Oshiomhole said.

However, former Senate leader and the Senator representing Southern Borno, Alhaji Ali Ndume, dismissed the new group, saying that only God and time could determine the direction of the APC in 2019.

Oshiomhole spoke to newsmen after receiving the report of the party’s just concluded National Convention Appeal Panel Committee’s report on Wednesday in Abuja.

The News Agency of Nigeria (NAN)  reports that Alhaji Buba Galadima who is the National Chairman of the Reformed APC,  announced its formation at a news conference at the Sheraton Hotels in Abuja on Wednesday.

“The assurance is that under my leadership, we will make honest mistakes and once our attention is drawn, we will find courage to make up for our mistake.

“Some people say how can people eat their words, for me, I will eat my words if it is nutritious enough and if that is what I have to do to have peace in the family,” Oshiomhole said.

He expressed appreciation to members of the party for his election and for entrusting with him, the responsibility to pilot the party’s affairs at this time.

He acknowledged that he new of the party’s challenges before accepting the task, saying that it was a huge opportunity for him and other newly elected executives of the party to make a difference.

This, Oshiomhole said, was not only for the party, but for the country generally.

“So, I appeal to people to realise that a blind man can redeem his eyes if he applies the correct medication, but you can’t force it to open over night,” he said.

He added that forcing the eyes to open over night, would create more problems and damage the eye the more.

The APC national chairman maintained that he would do everything possible to sustain confidence and trust, adding that everybody was important in the party.

He also said that everybody in the party matters, adding that he would run an inclusive party.

“I pray for wisdom and courage and I believe that we have it and we will deploy it for peace within the APC family,Oshiomhole said.

He said the threat by the R-APC and nPDP to leave the APC would never spell doom for it, but only God and time would tell.

The Senator who admitted that politics is all about interest, said there was however, nothing wrong if an aggrieved group voices out its displeasure.

He added that movement from one political party to another is normal in politics.

“So, politics is about interest and if somebody feels that his or her interest will be more protected by voicing out his dissent, it is Ok.

“This party is a party of time, decided by Nigerian masses and it is only God that can decide the time of a political party: God and Nigerians know that APC government is the light at the end of the tunnel,”the Senator said.

Malam Bolaji Abdullahi,  APC National Publicity Secretary was more laconic in his reaction. He said the party leadership would get the full details of what happened. 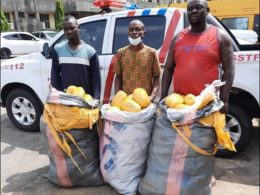 Operatives of the Rapid Response Squad (RRS) in the early hours of today April 3, 2022 intercepted a busload of illicit drugs at the Mile 2 area of Lagos State.
byTayo Aderinola
13 shares
13
0
0
No comments 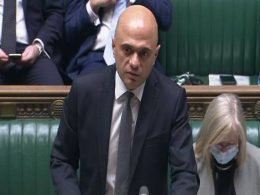 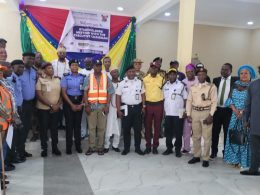 The Executive Chairman of Ojodu LCDA, Hon David Olusegun Odunmbaku has reiterated the effectiveness of the ban on okada riders on all routes within the LCDA as declared by the Lagos State Government.
byLateef Idris
No comments

Federal High Court in Lagos has ordered that Mr. Ayode Fayose, ex-governor of Ekiti state be remanded in…
byTayo Aderinola
No comments