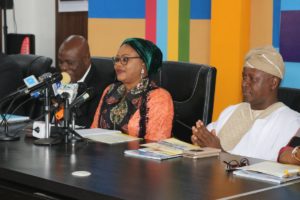 …Shops For Investors To Expand Road, Rail Infrastructure Along Corridor

The Lagos State Government on Monday said over $735.8million (about N264billion) worth of finished goods have so far been exported from the Lekki Free Zone project in the last three years.

Commissioner for Commerce, Industry and Cooperatives, Mrs Olayinka Oladunjoye who disclosed this at the annual Ministerial Press Briefing to mark the third anniversary of Governor Akinwunmi Ambode’s administration held at the Bagauda Kaltho Press Centre in Alausa, said the government was totally committed to the development of businesses in the Zone, adding that measures were taken to ensure that the goods meet international standard before they are exported out of the country.

She said the Nigeria Customs, Nigeria Export Processing Zones Authority (NEPZA) and other supporting agencies coordinated the exporting process of the goods in conjunction with the Standard Organisation of Nigeria (SON), saying that it was a testament to the fact that the Zone was living up to expectation.

Oladunjoye also disclosed that to date, the Joint Venture with the Chinese Consortium has a total equity investment of $180.4million and has received Foreign Direct Investment (FDI) totalling $140.2million out of the $200million FDI expected from the Consortium.

Besides, she said 125 investors have registered, while 59 investors have their Lease Agreements, adding that 726 Nigerians have been employed by the FZEs and N376.5million spent on executing 14 Corporate Social Responsibility (CSR) projects for host communities.

She listed other achievements in the Lekki Free Zone to include $500million FDI from FZEs in operation, while a Customs Processing Centre (CPC) for Nigeria Customs Service was established to improve the ease of doing business and eliminate bottlenecks.

The Commissioner said the Government has opened its doors to investors willing to partner the State in the provision of inter-modal transportation infrastructure within the Lekki Free Zone axis, with emphasis on road and rail system to accommodate the massive investments coming into the corridor and solve the attendant traffic challenges.

She said with the emerging industrial revolution within the Epe-Ibeju-Lekki corridor of the State especially the Lekki Free Zone, the Lekki Deep Seaport, the Dangote Refinery and Fertilizer Plants, Lagos was fast becoming the preferred investment destination across the globe.

But she said the State Government was not unmindful of the fact that an integrated transportation system was critical to the success of the emerging business activities zone when all the ongoing businesses come on stream.

“However we are not unmindful of the fact that one of the critical success factors, that is, an integrated transportation infrastructure, must be catered for along with these various investors’ endeavours within the corridor for us to harness the full values that these projects will bring on board when they all fully come on stream,” she said.

She said plans are already in top gear to provide a holistic inter-modal transportation network comprising rail, road and water transportation systems so as to mitigate future challenges especially traffic congestion in view of the envisaged estimated 6,650 daily trucks movement within the corridor when all the ongoing businesses take off fully.

“I said in my report that we do not want to have another Apapa on our hands. This government is responsive and it’s a government that is futuristic.

“In realization of the enormity of the required funding vis-à-vis the compelling need for transportation infrastructure, notably road and rail within the Lekki Free Zone corridor, the State Government has encouraged investors to express interest in of the planned axial roads that would take vehicular traffic away from the adjoining towns of the area and to Ogun State and there are other roads that we are working on,” Oladunjoye said.

The Commissioner assured that the State Government would do everything possible to fast-track the necessary procurement process for the selection of the concessionaire to enable construction work begin on the road before the end of the year.

On the Lekki Deep Sea Port, the Commissioner said that work has already commenced after the ground breaking ceremony performed by the Vice President, Professor Yemi Osinbajo, revealing that the Port which would be the deepest seaport in Sub-Saharan Africa will create over 170,000 direct jobs in the State while the first ship is expected to berth before the end of the first quarter in 2020 when the construction would be completed.

Speaking further, Oladunjoye said the State Government has concluded plans to activate the Memorandum of Understanding (MoU) signed with the Kano State Government after the Lagos-Kano Summit to set up a leather hub in Lagos.

“Recently I was at the Leather Fair and I saw the extent of the value chain of leather and was really impressed. Part of the fall out of the Lagos-Kano Summit is for us to leverage on our strengths and comparative advantage. Kano is the hub for Leather and our plan is to have a leather hub, a shoe factory here in Lagos,” she said. 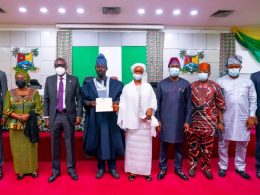 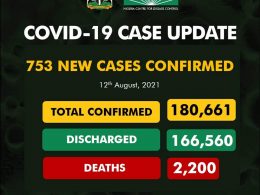 On the 12th of August 2021, 753 new confirmed cases and 5 deaths were recorded in Nigeria
byTayo Aderinola
No comments 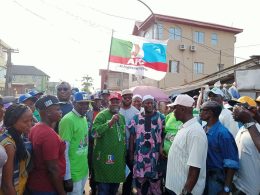 The Anifowose ward D in Ikeja Federal Constituency on Monday hosted the All Progressive Congress (APC) Walk-Through-Rally a grassroots engagement for the sensitization of voters for all the party's candidates which include the Presidential candidate Asiwaju Bola Ahmed Tinubu, the reelection of Governor Babajide Sanwo-Olu, Dr. Idiat Adebule for Lagos West Senatorial District, the reelection of Rt. Hon James Abiodun Faleke, the reelection of Hon Adedamola Richard Kasunmu LSHA Ikeja II and the incoming Hon Seyi Lawal for LSHA Ikeja I, in the forthcoming general elections.
byTayo Aderinola
No comments

Lagos State Governor, Mr. Babajide Sanwo-Olu, has mourned the passing of the first Civilian Governor of the State, Alhaji Lateef Jakande. Jakande, a renowned journalist and elder statesman, who governed Lagos State during the aborted Second Republic between 1979 and 1983, died on Thursday at the age of 91.
byTayo Aderinola
No comments