The Lagos State Internal Revenue Service (LIRS) on Thursday shut 11 hotels, restaurants and event centres over alleged failures to remit their taxes under the Hotel Occupancy and Restaurant Consumption Laws of Lagos State 2009.

Mr Seyi Alade, Director, Legal Services of the LIRS, said this after a state-wide tax law enforcement exercise in Lagos, adding that the firms owed the state government N354.75 million in unpaid taxes.

Alade told the News Agency of Nigeria (NAN) that the government had started full enforcement of all aspects of tax laws on defaulting taxpayers.

He further warned that failure to file Annual Tax Returns, false declarations in returns filed and evasion of taxes were criminal offences punishable by severe fines and jail terms upon conviction by a court.

“Any failure to deduct and remit taxes as and when due in Lagos State will now attract very serious monetary penalties.

“These penalties include sealing of the company, seizure of the goods and chattels and criminal prosecution of principal officers of recalcitrant entities.

“We are presently prosecuting 52 high net-worth personalities and 20 entertainment celebrities before the State High Court for offences ranging from failure to file Annual Tax Returns, false declaration in Returns and tax evasion,”he said.

He added that over 200 corporate bodies were currently being prosecuted before the High Courts for failure to file returns and remit their taxes to the government.

Alade advised that taxpayers should take advantage of the window of opportunity created by the Voluntary Assets and Income Declaration Scheme (VAIDS), to regularise their tax status relating to previous tax periods.

“In exchange for full and honest disclosure of assets and income, such taxpayer will benefit from the forgiveness of overdue interests and penalties till the 31st December 2017.

“Declarations made from 1st January 2018 will attract interest but no penalties up to the end of the scheme on March 31, 2018,” he said.

He appealed to all taxable individuals and business entities operating in the state to ensure prompt remittance of their taxes to avoid the additional payments of interests.

Alade added that business entities and taxable individuals who failed to remit their taxes promptly would also suffer penalties and disruptions to their businesses as a result of tax evasion. 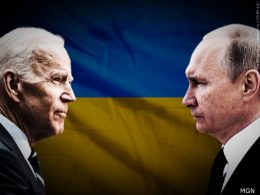 The United States President, Joe Biden, says NATO will not fight a war against Russia in Ukraine
byTayo Aderinola
No comments

Joshua ready for showdown with Wilder

Also present at the State House Council Chambers where the ceremony is holding in Abuja are, Senate President…
byTayo Aderinola
1 share
1
0
0
No comments