The Lagos State Government has assured that the state would soon commence the laudable Home Grown Feeding Programme of the APC led Federal Government in the State.

Dr Oluranti Adebule, the Deputy Governor and Commissioner and Education gave this assurance at the 2018 Ministerial Press Briefing of the Ministry to mark the three years in office of Gov. Akinwunmi Ambode of Lagos State at Alausa, Lagos.

Adebule said there was the need for proper planning and assessment to accommodate and ensure adequate meal for students.

She stated that one of the electioneering campaign promises of the President Muhammadu Buhari administration in 2015 was the provision of a free meal per day during school hours for public primary school pupils in the country and in that fulfillment of that promise, the administration in 2016 introduced the National Home Grown School Feeding Programme (NHGSFP).

Adebule, while stating that though the programme has commenced in some states, it needed careful and proper planning to get it running in Lagos State due mainly to its large student population and differential in prices of food items which is higher than what obtains in other states of the federation

”I’m happy to announce to you that we have engaged the office in charge at the federal level, as well as the state Ministries of Agriculture and Health. We are on course.

”Last Tuesday, we commenced the training of environmental officers who will screen food vendors to ensure adequate hygiene and prevent any form of infection.

”The process that will kick-start the school feeding programme in the state is ongoing and we will commence shortly.

”Lagos state is not known for shoddy programme and we are gunning for nothing but the best as you all know that our state is the centre for measuring excellence and we will want to do it in the best way that the motive behind that scheme is achieved’’ She  said.

Reeling out achievements in the year under review, Adebule said that the state government awarded car loans to 491 teachers to the tune of about N40 million just as she added that N30 million housing loan was approved for 38 teaching staff as a welfare package to increase productivity of the teaching staff to enhance  better performance of students

Adebule said that 57 cases of rape and child abuses were reported and were being handled in different courts of law across the state.

She stated that the state government’s initiatives of Ready-Set-Work, Code-Lagos, Project 350; Digital Library have all recorded remarkable achievements during the period under review.

While the Ready- Set –Work initiative since inception in 2016 has trained twelve thousand five hundred (12, 500) and will in 2018 be training twenty five thousand (25,000) students, the Code Lagos initiative has trained over thirty one thousand Lagosians to code and has set up 364 Coding Centres in various schools and localities.

”The Gov. Ambode led-administration’s target is to ensure that 95 per cent of residents can at least read and write.

”Our vision is to be a model of excellence in the provision of quality education for the attainment of self-reliance and socio-economic development.

In order to ensure that teaching /learning is taking place in a very conducive environment for learning in both public and private schools across the state, the deputy governor stated that the state government had created an office called Office of Education Quality Assurance which was saddled with the conduct of whole school evaluation of public and private schools in the state , adding that the agency has been monitoring all academic activities both in the private and public schools just to ensure a total compliance with the standard set by the state government.

She added that this initiative has helped to bring significant improvement to learning outcomes as reflected in better performance of students in both internal and external examinations across the state. For example, the deputy governor disclosed that out of a total number of 152,882 public and private school pupils that sat for the Year 2017 placement Test into public Secondary Schools, a total of 146,116 which is 95.61% were successful and offered admission, promising that the state government would not relent to initiate programmes and policies that would continue to improve the standard of education in the state.

Shareholders of FCMB Group Plc on Friday at the Annual General Meeting approved  a dividend of N1.98 billion…
byTayo Aderinola
No comments 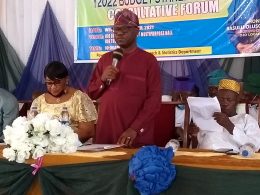 ....To itemise the request of five political wards aimed at improving the infrastructural development and economic empowerment of the people.
byLateef Idris
No comments