The Lagos State Government in its bid to achieve a cleaner and healthier environment has moved into the Idi-Araba area of the State to clean the environment and restore sanity.

The Commissioner for the Environment, Mr. Babatunde Durosinmi-Etti revealed this during a meeting with stakeholders in Alausa, Ikeja, Lagos, Southwest Nigeria on Tuesday.

The Environment Commissioner said that Idi-Araba Community had suffered from series of abuse of the environment which could pose serious hazards to members of the community, if unchecked.

He said that the state government’s intervention in the community, as well as many other communities in the state, was informed by the desire to protect the wellbeing of the people by preventing the outbreak of epidemics, adding that flagrant abuse of the environment often led to the pollution of water sources, cholera and other communicable diseases.

Durosinmi-Etti stated that stakeholders in communities were crucial to the attainment of clean, livable environment as they were not only the sources of waste and environmental nuisance but also critical factors in sanitation and waste management.

His words: “the signal that we are sending with our strategy of involving community stakeholders, who are actually the waste generators, is that waste management is a collective responsibility.

“For instance, you can see that we need to harmonize issues of enforcement and protection of sanitation workers with the people and enlist the support of members of the community, particularly in areas notorious for demanding money from refuse trucks or where sanitation workers are being denied access to the streets out of sheer hooliganism.”

Durosinmi-Etti informed that the cleaning of Idi-Araba, which is being carried out in collaboration with major stakeholders such as the Chapel of the Healing Cross, Sterling Bank, Access Bank and Zenith Bank as well as the Yoruba and Hausa Communities, was planned to carry along everybody at the grassroots, adding that volunteers, who would collaborate for enforcement and sanitation purposes, would be drawn from all segments of the Idi-Araba community.

To address behavioural issues, he said that the Advocacy Unit of the Environmental Services Department of the Ministry had been mandated to reach out and train members of the community on appropriate waste disposal methods in order to sustain the ongoing effort to sanitise the area.

The Commissioner emphasised that stakeholders’ involvement in the Idi-Araba clean-up, as well as in other parts of the State such as Apapa and Ifako-Ijaiye, was important in the implementation of environmental sanitation plans and programmes of the Lagos State Government. 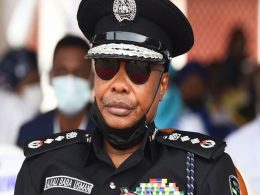 2023 Elections: IGP orders all Policemen to be neutral during campaigns

The Inspector-General of Police, IGP, Usman Baba, has directed all police personnel in the country to be neutral in all processes for the 2023 general elections.
byTayo Aderinola
No comments

On the 19th of November 2020, 146 new confirmed cases and 2 deaths were recorded in Nigeria Till…
byTayo Aderinola
No comments

On the 21st of February 2021, 521 new confirmed cases and 8 deaths were recorded in Nigeria
byLateef Idris
No comments