Commissioner for Youth and Social Development, Agboola Dabiri launching the signs and symbols

The Lagos State Government on Monday launched the use of signs and symbols for banks, hospitals police stations and front desks to enable professionals communicate with people with hearing impairment when they seek their services of the organisations.

Commissioner for Youth and Social Development, Agboola Dabiri, who launched the signs and symbols in Alausa, Ikeja, Lagos, Southwest Nigeria, said they would enable people with hearing impairment (deaf) communicate properly with professionals in their various fields.

He said this was the first time such an innovation was being launched in the country to assist people with hearing impairment communicate with those who were not physically challenged.

Dabiri stated that the launch was part of the administration of Governor Akinwunmi Ambode to run an all inclusive government.

The commissioner said the launch was the first phase, which covered hospitals, police stations, hospitals and front desk, adding that the second phase would be expanded to cover public transportation, especially BRT, among others.

“We have created something that will help people with hearing impairment when they go to the police station, hospitals, banks and other places to be able to communicate with the people there through signs and symbols. This is the first of its kind in Nigeria,” he said.

According to Dabiri, government would subsequently improve on what had been produced in the years to come to produce an electronic version.

The commissioner added that government was committed to the plight of people with disabilities in the state and would provide the enabling environment to make them comfortable in the state.

Agboola called on all service providers to acquaint themselves with the various basic sign languages as indicated in the booklet in order to have unhindered communication with these category of persons and also give them a sense of belonging in the society.

The General Manager of LASODA, Dr. Babatunde Awelenje acknowledged the roles which the sign language booklet would play in integrating persons living with speech and hearing impairment into the society.

According to him, if the communication barrier with persons living hearing and speech impairments is addressed, these categories of persons can live a normal life like those without any disability. 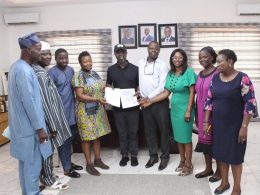 In line with Sustainable Development Goal (SDG) number six, which seeks to bring clean water and sanitation, the Water Aid Kimberly Clark Project, in partnership with Ojodu Local Council Development Area (LCDA), says it has set out a program on water sanitation and hygiene activities.
byLateef Idris
No comments How one-million-man PVC march for Tinubu shut down Kano