The Director Highways, Bridges and Designs in the Federal Ministry of Works, Mr Adetokunbo Sogbesan, said in Lagos said that the Carter Bridge is structurally sound and safe for use.

The News Agency of Nigeria (NAN) reports that a portion of the outer walls of the bridge outbound Iddo link road was dented.

Sogbesan told journalists during an inspection of the bridge that some tests had been conducted and that the bridge is structurally okay and safe for use.

He said vehicles carrying excess load beyond the headwall of the bridge had knocked off outer slabs meant to beautify the bridge.

He explained that the beams of the bridge had hollows which were covered by slabs but that vehicles carrying loads beyond their headroom pulled off some outer covering of the bridge.

“We are here to allay the fears of Lagosians about the Carter Bridge. This bridge was commissioned in July 1958, that is, over 60 years ago.

“And it was constructed by Borini Prono Nigeria Ltd. The method of construction used is that the beams have hollows.

“The hollows are spaces. The stability of the bridge both longitudinal and diagonal beams are structurally okay but for aesthetics measures the beams were covered with reinforced walls.

“It is the walls that are broken. We have been here before to examine and inspect the bridge and we are here to confirm that structurally, the bridge is okay,” Sogbesan said.

Sogbesan also said that barricades would be put on Iddo link road where the problem occurred to ensure that only cars and buses use the road to avert damage to the bridge.

According to the director, the link road was originally built by Lagos State Government to allow cars and buses pass through the Third Mainland and Carter bridges to the Island.

Sogbesan warned all illegal occupants encroaching under the bridge to quit, saying they will soon be evacuated.

“A“We will start enforcement immediately, we would issue notices and we are going to enforce it. We are going to evict every illegal occupant under the bridge. We don’t want abuses on the bridges again.

“We must move them out and we are going to collaborate with Lagos State,” he said.

Mr Gainrranco Albertazzi, Joint Managing Director, Borini Prono, who confirmed that the bridge was constructed by the firm in 1958,said the Carter bridge was not damaged.

“It is only the damage done by a vehicle carrying some loads that should not have passed through the bridge, but the main beam is structurally intact.

“What has been touched is the cover which is of a small thickness which is not too important.

“More so, this first beam is only carrying the pedestrian lane, it is not carrying any vehicular traffic,” he also told journalists.

He said there was no cause for alarm as the bridge’s slab could easily be replaced.

He stressed the need to speed up the construction of the barricades to stop further damage beyond the slabs.

The Federal Controller of Works, Lagos State, Mr Adedamola Kuti, said a task force was being set up to dislodge illegal occupants under all the bridges in Lagos.

“We are going to evict illegal occupants of our infrastructure.”

While inspecting the Third Mainland Bridge, he said significant progress had been made on the testing of the expansion joints.

“We have gone very far, we have made appreciable progress as far as this investigative test is concerned.

“We have made substantial progress, our target is that tomorrow (Sunday) we will make the Third Mainland Bridge accessible.”

The News Agency of Nigeria (NAN) reports that workmen moved some equipment and censors on the bridge as they tested the expansion joints with security agents guarding the bridge on all sides.

However, youths used both carriageways on the Owonronsoki end of the bridge that has been barricaded to play football.

The 11.8km bridge was closed to traffic on Aug. 24 for investigative maintenance tests and it is expected to be reopened to traffic midnight Aug. 26.

Governor Akinwunmi Ambode on Sunday afternoon literally went for broke, throwing all his arsenals into the ring ahead…
byTayo Aderinola
No comments 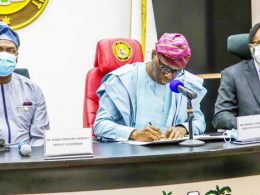 The Attorneys General of the 36 states of the Federation will on Wednesday meet in Lagos to discuss some critical legal issues bordering on Value Added Tax, Paris Club Refunds, and Stamp Duty, among others.
byLateef Idris
No comments

Lagos, Africa’s biggest city and business hub of Nigeria has initiated a total lockdown, with the restriction of…
byTayo Aderinola
1 share
1
0
0
No comments