The day, June 12, is trending as the International Labour Organisation (ILO) has declared it World Day against Child Labour Day just as Nigeria made it Democracy Day.

The Nigeria Labour Congress (NLC) said on Tuesday urged Nigerian government to seize the opportunity of the day to address the issues of inequality and poverty and also strive to abolish child labour.

Nigeria on its part declared it Democracy Day against the earlier May 29 and made it a public holiday in recognition of the June 12, 1993 presidential election that was annulled by military leader Ibrahim Babangida.

The election presumed to have been won by late Chief MKO Abiola, caused political logjam and disunity. President Muhammadu Buhari on Tuesday recognised the Day and gave nation’s highest honour to the main gladiator of the election.

Mr Ayuba Wabba, NLC President, told the News Agency of Nigeria (NAN) on Tuesday in Abuja that ILO has also estimated worldwide that 218 million children between 5 and 17 years are in employment, while 152 million are victims of child labour and 73 million, work in hazardous child labour.

The ILO also estimated that in absolute terms, almost half of child labours (72.1 million) were to be found in Africa.

According to Wabba, we have about 218 million of these children working under very precarious condition. They ought to be in school and not actually working.

“Therefore, there are two conventions that actually try to address these issues of which Nigeria is trying to domesticate the conventions.

“One of them is convention 138, which deals with the minimum age for anybody to be employed to work, that is 18 and above and therefore from five to 17 years old anybody that is between that age group is hacking on child labour.

“We also have convention 182, which deals with the worse form of child labour where we have children working in very dangerous working environment.

“We have most of these occurrences in sub-Sahara Africa and some part of Asia where there is issue if inequality and poverty,” he said.

The NLC president said it was necessary for the government, worker groups, among others to collaborate in ensuring that these children were not out in the streets working in precarious situation.

He said that the government must ensure that the youths are developed and engaged in order to become responsibly citizens of the country.

“That is why these two conventions is very important and strategic because we cannot address the issue of inequality without quality education to the youths which is a very important instrument.

“Therefore, we have to use a lot of platform to actually do policy engagement, and if you remember, we have the child right act, though not too many states have domesticated the act.

“If the act is domesticated, it will go a long way, that is if all the states are able to domestic it. We must also make the domestication a central policy in our development,’’ Wabba said.

He, however, called on government at all levels to embrace free education from primary to tertiary level and other benefits such as scholarships and bursary as it would encourage the children of the poor to continue to access education.

He also noted that the best way to address the issue of inequality and poverty was to give the children of the poor quality education.

“Because by the time they are educated, they would find their level in the society but if we denied them education and make them to work under precarious conditions then their situation becomes worse in the society.

“Like in the Nigeria context, children are seen hawking not because that is what they want to do but because there is extreme poverty and these children are used to augment the family income, ’’ he said.

He also called on the government to address the issue of social justice, inequality, social security as this was the only way to ensure abolition of Child Labour in the country.

Wabba said that labour would do a lot of advocacy and policy engagement to ensure that the abolition of Child Labour was achieved.

He also noted that part of the labour law being reviewed by the National Assembly was also to address the age bracket that ILO has raised in its Committee of Expert report since 2012, saying that Nigeria should review its laws.

According to him, the review will also crimainalised all employers that employed children between the ages five and 17 except possible farming.(NAN) 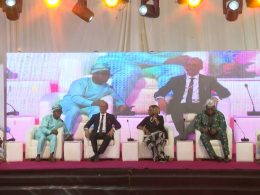 The Presidential candidate of the All Progressive Congress (APC), Senator Bola Tinubu, has promised to introduce innovative policies that will turn around the Nigerian health sector and improve the nation’s poor health indices if voted into power.
byTayo Aderinola
No comments

Senators Thursday took turns to laments the poor state of primary health centres in parts of the country.…
byTayo Aderinola
No comments