Indigenes vs Settlers: The Implications in Socio-Politics

These issues are so vital to Lagos that it is dangerous for our leaders to merely glibly address it superficially. The recent occurrence in Ikorodu with accusing fingers pointing at the Ijaw people is note-worthy. The Hausa/Yoruba clash of mile 12,Ketu  is also a vital signal for the importance of the issues of settlership, citizenship and indigeneship.

The Hausas in Shagamu (quite in large numbers for over 200 years)  are  examples of Lagos settlers and their hosts took them as such, even though their forebears had gone there for trade over a century ago. The Igbos are fast becoming significant settlers of the Alaba axis. . Citizenship is a constitutional issue. Anybody in Nigeria is a citizen of the country. Even foreigners can come in and naturalize and become citizens. But indigeneship is a different game … (indigeneship) is that you have a virgin area, an area that is God-given and you have been there from day one.

There are fundamental differences between the two concepts: indigeneship and citizenship, both theoretically and practically. Whereas indigeneship is a natural link between a person and a geographical location-his ancestral home- where he traces his roots through a blood lineage and genealogy that puts him in contact with his kin and kindred, citizenship is a man-made arrangement that seeks to confer on a person certain rights that are enjoyed by all persons in a certain geographical location. For instance, the Igbo are identified with the South-eastern part of Nigeria . When an Igboman gives birth to a child, the child automatically becomes a citizen of Nigeria by the mere fact that his parent(s) is associated, by a blood-land attachment, to a geographical location called home-igboland- within Nigeria . A Scot, who does not have this attachment could however settle in any part of Nigeria , contribute to its development, and be conferred citizenship status. The difference here is that whereas the citizenship of the child born to Igbo parents cannot be revoked (though theoretically the person can renounce his citizenship), the citizenship conferred on the Scot could be cancelled anytime at the discretion of the President of Nigeria.
While it is true that the Constitution grants equal political rights to all Nigerians in all parts of the country, the same document does not extinguish the rights of ethnicities (indigenes) to their homelands as the only means by which, via wards and constituencies, they can elect or be elected to councils and parliaments. Also in Nigeria, indigenes as ethnicities, tied to lands under their various traditional rulers, have historically, from time out of memory, depended on, and derived their livelihood:

On the indigenes/settlers question, the Supreme Court of Nigeria sitting Justices in Abioye vs Yakubu (1991) 5NWLR 130 SC unanimously confirmed a lower court decision by holding that the Land Use Act, (section 315 (5) (d) of the Constitution of 1999) has not abolished the rights of customary landlords over customary tenants (settlers). It decided that the vesting of the radical title to land in the state governor for the use and benefit of all Nigerians, does not abolish the relationships between customary landlords and customary tenants. The court pronounced that the law was never intended “to rob Peter to pay Paul” that is, taking land from the owners and giving it to non-owners. This judgment has further strengthened the claim of indigenes over settler-citizens

The socio-political implication of the issues of settlership, indigenship and citizenship is multi-faceted. In Agege ,many Yoruba indigenes speak  Hausa language  and vice versa. This is cultural mutation   resulting  from  harmous co-existence  of  our people irrespective of tribe. The Omo Onile {land grabber} phenomena  is an off-shoot of indigenship and this has grown to a menace  to real estate development by the poor. Recently, the governor proscribed the activities of the  Omo Oniles across the State but the effectiveness of this pronouncement is yet to be felt.

In respect of politics, the non-indigenes polarize to make political statements in elections of Lagos State  and they have made certain areas their electoral  catchment zones. An Igbo related candidate is likely to win election in the Alaba axis of Lagos. In Agege, a Hausa related   candidate is likely to win election. During the 2015 elections, there was utterance urtication between the Igbos  and the monarch of Lagos which was diplomatically settled .This is  also an off-shoot of the  indigenship/settlership/citizenship mix of the metropolitan Lagos population. 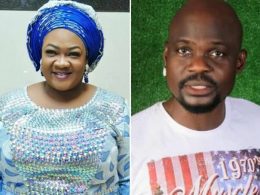 Nollywood actor, Olarewaju James, alias Baba Ijesha, on Friday testified before an Ikeja Special Offences Court in Lagos that it was Princess who asked him to kiss and suck the breast of the minor he allegedly defiled.
byLateef Idris
No comments