He donated a cow, several bags of rice, noodles and other food items to the centre as support for the children’s upkeep.

Idris who had earlier paid similar visits to Little Saints and Ijamido Orphanages located at Egbeda and Sango respectively, said the gesture was borne out of his belief that every child deserved a home and should be cared for.

The police chief, who was represented by the Area D Commander, Soji Akinbayo, an Assistant Commissioner (ACP), said taking destitute children off the streets would prevent their being used by hoodlums.

He said: “We came here to donate items to the SOS Children’s village. I  was sent by the Inspector General of Police (IGP) Alhaji Ibrahim Idris  to bring these items for the use of the children here.

“The IG is trying to introduce a new dimension into the system. He wants people to know that despite the tedious nature of our work, we are humans too and we care for the less privileged in our midst.

“We belief that when children do not have this kind of facility to stay in and people to donate, they become vulnerable and easily take to crime. I want the children to be encouraged and take their studies seriously. They should understand that no matter their backgrounds, they still have bright futures.”

Receiving the items on behalf of the facility, the Family Based Coordinator, Mrs. Bunmi Onifade said a total of 126 persons brought into the home have been resettled since inception.

She said they were resettled after they graduated from higher institutions and became independent, adding that the facility had about 123 children and teenagers it was currently catering for.

Onifade said: “We appreciate these gifts from the office of IG of Police and pray that God will replenish their pocket and their support to mankind will be noticed.” (The Nation)

The Senate Committee on Local Content as part of its oversight to ensure promotion of local capacity, has…
byTayo Aderinola
No comments

Nigeria has recorded 20 New cases of COVID-19, bringing the total number of confirmed cases in the country…
byTayo Aderinola
No comments 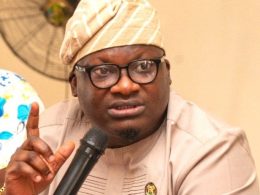 The Lagos State Government has announced readiness to shut down Ladipo and Oyingbo markets till further notice.
byLateef Idris
No comments

The new Woman Leader of the Lagos State Chapter of the All Progressive Congress (APC), Jumoke Okoya-Thomas, has…
byTayo Aderinola
No comments