How Gunmen Kill 3 Policemen After Buying Them Beer – Witness

A staff of the Ogba Zoological Garden and Natural Park in Benin, Helen Juchei, has related how three policemen were killed by yet to be identified gunmen after buying them beer.

The hoodlums who went away with the service rifles of the three policemen, also abducted the Director of the Zoo, Mr. Andy Ehanire.

Ehanire is the younger brother to the Minister of State for Health, Dr. Osagie Ehanire, and a former Senator and wife of a retired army General, Daisy Danjuma.

Juchei who was on duty on the fateful Sunday, said fun seekers who witnessed the incident, confirmed that the assailants bought three bottles of Heineken beer for their victims before shooting them, after the policemen carelessly laid their gun on the ground to drink their beer.

“Yesterday after I finished my normal duty in the morning, people were just entering the Zoo. And at this time, my boss has not come. We usually come before our boss and when he eventually came at about 1 pm, it was now my turn to take over my duty, I went to tell him that I was having a birthday party to attend and that was how he granted me the permission and I left for the birthday hoping to come back to assume duty later in the day.

“When I eventually came back at about 6 pm, I met three policemen lying dead on the ground. I was very shocked and what I saw after was people running for safety and the boss taken away.

“It was those whom we met at the scene that told us what happened.

“They said the kidnappers paid to enter the Zoo with a torn money which was rejected by the cashier at the gate. When the money was rejected, he went back to get a better money to pay the entrance fee.

“At this time, their informants have already gained entrance into the Zoo​ as fun seekers. When the informants​ had finally studied the terrain, one of them engaged our director in conversation.

“Our boss started telling him his plans to put up a world tourism day. As one of them engaged my boss in a conversation, the other one went straight to the security personnel and asked him if they have not closed​ for the day and decided to order for drinks​ for the officers providing security for the Zoo.

“This was what those who were there told us. So they bought them Heineken and as they laid down their guns to drink, that was when the hoodlums opened fire on them and killed the three police officers.

“We have not heard any information about the whereabouts of our boss,” she narrated.

Another staff of the Zoo, Mr. Zontondji Emmanuel, narrated how the hoodlums shot the police officers.

“I was on duty, I resumed by 5:30 pm and as I came in, I went round to inspect the animals and the visitors on ground. And after having done that, I came back to the reception where the Executive Director was sitting down and there was another one sitting at this end. There were two policemen sitting by him. So I went outside to observe what was going on outside.

“Outside, I saw an Audi 80 car parked and suddenly, I saw three men coming out with guns and one of them wearing a bullet proof vest and I thought that they were normal policemen who usually come here for normal security reasons.

“Suddenly, I saw them running into the zoo premises which is very unusual and when they entered, they started shooting immediately. So, all of us outside started running for our dear lives. I was calling on people running to give us police numbers, nobody was ready to stop because they were all afraid.

“But at the time I watched from afar and I saw that the men were going out with my Director. They went into the Audi Car and zoomed away. I now came into the Zoo premises and I saw the three policemen who were supposed to be guarding the director lying dead on the ground. After that, the DPO now came to take the dead bodies away,” Emmanuel said.

When journalists visited the family house of the abducted Zoo Director, Andy Ehanire, at the GRA, the family members were yet to come to terms with the incident.

They said what they needed at the moment was prayers​ for the deceased cops and the safe release of the abducted Zoo Director.

Meanwhile, the State Commissioner of Police, Mr. Haliru Gwandu, has described the incidence as unfortunate and assured that all hands were on deck to fish out the hoodlums.

Gwandu who spoke when he made an on-the-spot assessment visit to the zoo, described the killers of the three police officers as militants.

“It was an unfortunate incident. We lost three of our personnel. This is the activities of the militants because of the high sea now.

“They came and unfortunately killed our policemen, but we are on the trail of the hoodlums. We are able to recover the vehicles they used to perpetrate the act. We are using all the available means including the high tech to fish out the perpetrators.

“They cannot go scot free. Let me assure the general public in Edo State that we are on top of the situation and that they should go about their normal duty. All hands are on deck to ensure that the hoodlums are fished out,” he said. 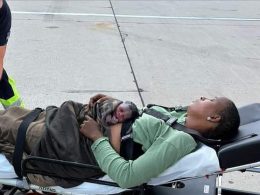 A Nigerian woman, Nweke Ifeoma gave birth to a baby on a Turkish Airlines during her flight from Istanbul, Turkey to Manchester, the United Kingdom on Monday.
byLateef Idris
No comments